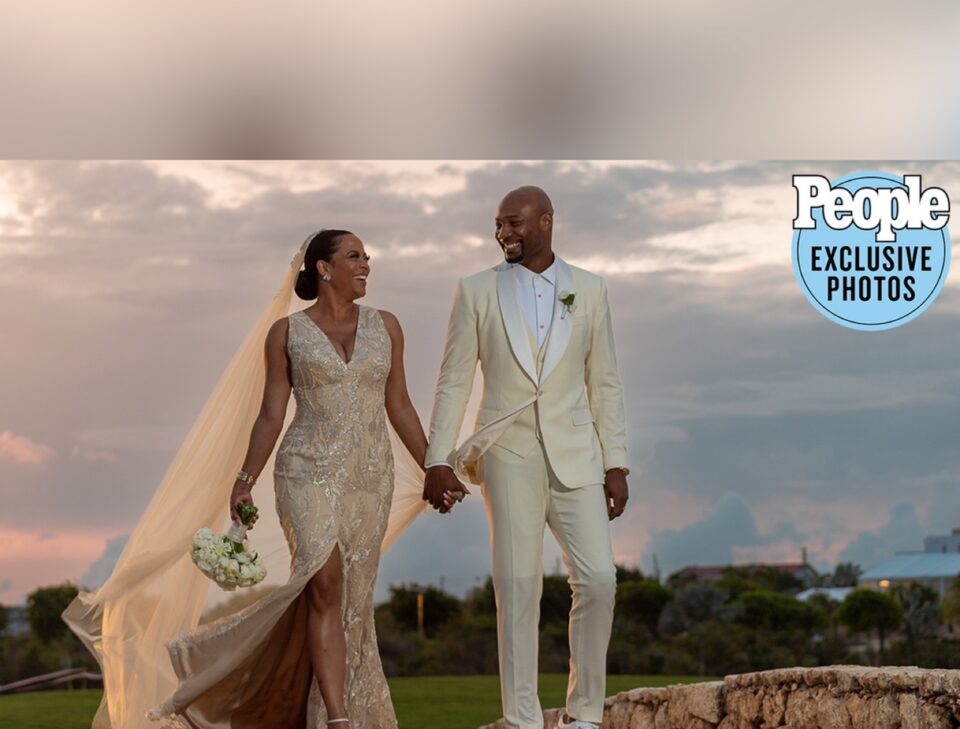 According to the outlet the two got married in a tropical island ceremony on Saturday, PEOPLE can exclusively confirm.

The ceremony was held at the Aurora Anguilla Resort and Golf Club with some 200 guests in attendance. The loving couple enlisted gospel superstar Yolanda Adams to sing Shaunie in as she walked down on the golf course’s 10th hole.

Shaunie’s three sons she shares with basketball star Shaquille O’Neal had the honor of escorting her down the aisle.

“I just lost my dad in February,” O’Neal tells PEOPLE. “So, I really struggled with how I was going to get down the aisle. Losing my dad in the midst of planning this wedding was a lot, so my sons handed me off.”

Having her five children (with ex Shaquille O’Neal) there to support her was “everything” to the happy mom, who describes her family as “package deal” when it comes to relationships.

O’Neal wore a sparkling gown by Jean Louis Sabajai in partnership with fashion stylist Eric Archibald, paired with a dreamy veil also from the designer. She accessorized with David Yurman jewelry and shoes by Jimmy Choo. The glowing bride’s updo was perfected by Diamond Johnson, with her makeup look created by Alaina Saulsberry.

Henderson wore a cream tux by Dolce and Gabbana, while the groomsmen were clad in Atelier Houston.

Bishop TD Jakes officiated the nuptials, which were planned by The Happy Couple with The Britto Agency/Global Brand Strategist and captured by photographer Manolo Doreste and videographer Michael Tamzil. The couple exchanged wedding bands from Jason of Beverly Hills.

The location was an easy choice for the newlyweds, who “immediately fell in love with it” on a past trip.

“I think after that first visit, we knew this was the place we wanted to get married,” O’Neal, 47, tells PEOPLE. For Henderson, 41, Anguilla’s rich history and welcoming residents made them “proud to connect to” the island and “start their journey” there.

During the reception, the couple’s friends and family dined on Anguillian-inspired dishes including local fish and crayfish, all among blush rose florals created by Black Orchid.

Guests spent the evening dancing to music from the Isley Brothers and Jukebox in a custom tent at the resort’s clubhouse and D Richards Restaurant, before Spinderella took over DJ duties in the late-night hours for the afterparty.

Thoughtful details were incorporated throughout the ceremony and reception, including an Eleven/11 (a meaningful symbol to the newlyweds) toast with McBride Sisters Brut Prosecco.

While extravagant, and certainly larger than they had initially anticipated — Shaunie tells PEOPLE that their original number of guests was only 50 — the evening was special and intimate. “We wanted our guests to have a weekend of enjoyment,” O’Neal says. “We just like to have fun and love on each other and we wanted to do that with our friends and family.”

The couple dated for two years before announcing their engagement last November. For both O’Neal and Henderson, the connection was undeniable from their first date, a six-hour rendezvous inside a hotel lobby.

“I was in California getting ready to preach. … She finally agreed to meet me,” Henderson tells PEOPLE. O’Neal had been out to dinner with a friend earlier that evening and told her future husband she’d go out with him “if she had time after eating.”

So for the next six hours, they connected over family and faith. “But then I walk her to her car, give her a sideways hug, and I let her get in the car and drive off,” the groom says.

“He didn’t even try to kiss me!” his bride interjects.

Henderson says she gave him “complete pandemonium” for weeks after he fumbled that first smooch. He made up for it at the perfect time, though: “I showed her the kiss I would have given her the day I met her,” Henderson tells PEOPLE of their first kiss as husband and wife on Saturday.

Henderson fit right in with her family long before the “I dos,” his bride says. “He’s been amazing to just step into our lives and fill a void that’s been there for a minute in a space of just being here with me, cause I haven’t had somebody,” she says. “They love him which makes me love him even more.”