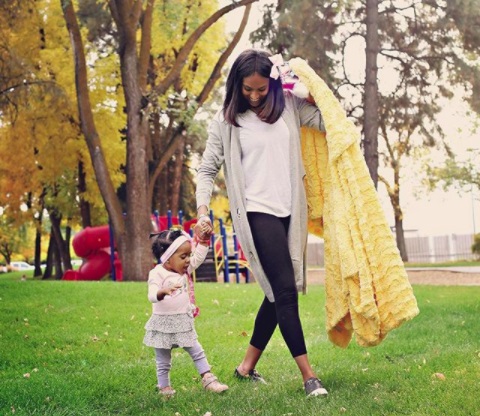 Shivolli DaSilva is focused on helping babies sleep like a baby. According to figures reported by the Juvenile Manufacturers Association, the wholesale infant sleep industry is worth $325 million a year. Many individuals and families who have lived with a newborn know that sleep is a luxurious, and valuable commodity.

DaSilva, who is the former fiancée of NBA star Derrick Favors, recently opened the doors to S&S Luxury, a luxury blanket and children’s accessories retailer in Atlanta’s Phipps Plaza mall.

Woman of color are the fastest growing population of entrepreneurs in the country, but we do not typically think of or see women of color in the bedding industry. “I was drawn to the luxury blanket industry by first receiving a blanket for my girls when they were born,” says DaSilva. “I really fell in love with the luxurious feel of the fabric and I felt this was an industry that I wanted to be a part of.”

Prior to being pregnant with twin girls, DaSilva was interested in business ownership. Originally interested in a clothing retail store, DaSilva shifted her retail niche to the luxury blanket industry after being introduced to the luxurious Mink Blankets.

“When they were born I was even more driven and determined to become an entrepreneur. As a mom, having something that I could pass on to them while teaching them invaluable work ethic is important to me. In addition, I wanted to be a positive role model in their eyes.”

It’s estimated that American parents spend some $12,000 on their babies in the first year alone. According to Statista, the global baby care market is presumed to hit $66.8 billion when 2017 numbers roll in.

Silva believes that she has a unique opportunity as a black female to make an impact in the luxury blanket industry. DaSilva says, “I define success by trusting and believing in God. That’s really it. That’s my life motto and I live by those words every day. Pretty much just giving it all to Him and he will make a way and path for me.

In the next 1-3 years, DaSilva is planning to expand her luxury blanket brand beyond the Atlanta market and venture into related industries such as childcare.

“I want to be a multifaceted entrepreneur who can provide a solid foundation for my children to build upon and learn to establish themselves in the community.”

The true definition of a Mompreneur, DaSilva is a single mother of three balancing her mom duties with those of her thriving business. She offers up three key pieces of advice for young women of color who find themselves taking on the responsibility of being a single mother.

“I would tell them to never give up, stay motivated, and don’t let anyone tell you no and trust in the Lord. You know I don’t take no for an answer, so you have to stay motivated and keep moving forward no matter what anyone else says.”