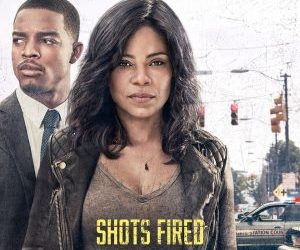 Shots Fired is what America needs and has been waiting for since the untimely and unjustified deaths of African American women, boys, and men across the nation. This show is a 10-hour event mystery, that allows the viewers to take a hard look at the criminal justice system, due to the shootings of two victims set in Charlotte, North Carolina. This storyline will resonate not only with AfricanÂ Americans, but all Americans no matter what part of the country they reside.

The creators and cast have been on the move with private screenings and panel discussions in Nashville, Atlanta, D.C., and New York City, which have brought out viewers excited to not only see the first episode, but also have left them eagerly awaiting the entire 10-hour event series.

Check out the summary of Shots Fired, courtesy of FOX.com:

“When JOSHUA BECK (Mack Wilds, The Wire),Â an African American Sheriff’s deputy, kills an unarmed white college student, a small town in North Carolina is turned upside-down. Before the town has a chance to grapple with this tragedy, the neglected murder of an African American teen is brought to light, opening wounds that threaten to tear the community apart.

Leading the Department of Justice’s inquiry into these shootings is seasoned investigator ASHE AKINO (Sanaa Lathan, The Perfect Guy, Love and Basketball) and a young Special Prosecutor, PRESTON TERRY (Stephan James, Race, Selma), both of whom are African American.Â As they start to peel back the layersÂ of both cases, they suspect a cover-upÂ thatÂ may involve some of the state’s most powerful people, including fiercely political North Carolina Governor PATRICIA EAMONS (guest star Academy-, Emmy- and Golden Globe-winning actress Helen Hunt, As Good As It Gets, The Sessions). She’s in a tough re-election fight, and the recent shootings in her state are making it even tougher. Meanwhile, real estate mogul and owner of a privatized prison ARLEN COX (Academy- and Golden Globe Award-winning actor Richard Dreyfuss, The Goodbye Girl, Jaws, Madoff), is pulled into theÂ volatile debate over policing in the town,Â and LT. CALVERT BREELAND (Stephen Moyer, The Bastard Executioner, True Blood), a seasoned veteran in the Sheriff’s Department, gets caught in the middle of the investigation.”

Be sure to catch theÂ Shots Fired premiere on Wednesday, March 22, on FOX, and be sure to tune in every Wednesday night at 8/7c for upcoming episodes.

You can also follow Shots Fired on social media: