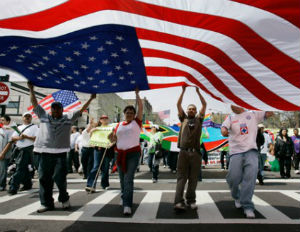 Small business owners have been outspoken supporters of immigration reform and recent polls speak to that.

The respondents to the survey identified as 47% Republican, 27% Democratic and 26% Independent.

Richard Eidlin, Director of Public Policy for the American Sustainable Business Council, said: “Small business owners recognize that immigrants contribute to our economy in important ways — as workers, as business owners and job creators, and as a growing economic force that strengthens the small business customer base. A roadmap to citizenship will help to create stronger communities and a stronger economy overall.”

“Small businesses need immigration reform that creates economy-boosting jobs, strengthens consumer demand on Main Street, and meets the needs of a modern economy. A roadmap to citizenship is the way to achieve that,” saidÂ David Borris, owner of Hel’s Kitchen Catering inÂ Northbrook, IllinoisÂ and a leader in the Main Street Alliance network.