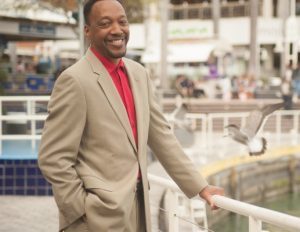 Trabian Shorters founded the BMe Community to reframe the narrative around black men. The organization identifies men who are doing positive work in their communities, and comes alongside them to provide support.

Shorters is also a Pahara-Aspen Fellow. “The Pahara-Aspen Fellowship seeks to strengthen and sustain diverse, high-potential leaders, who are reimagining public education.â€ The prestigious fellowship lasts two years, during which time, Shorters along with 28 other Fellows, participated in advanced leadership seminars, which include extensive readings.

Shorters and I spoke recently about the Fellowship.

BE Smart: What has your experience as a Pahara-Aspen Fellow been like?

Shorters: I recently spent a week reading in the canon of Western thought. As a busy person, I initially rebelled against this notion, but I ended up really impressed and inspired. We discussed issues like rights, community, values, inequality. We read Hobbes, Aristotle, Rousseau, the Founding Fathers, Plato–of course–and John Locke, Karl Marx, Martin Luther King, de Tocqueville, and others.

BE Smart: How many people were participating in the seminar?

Shorters:Â About 35 people were in the Aspen seminar with me. They ranged from an education reform leader, to the head of a major corporation in Spain, to a director of the CIA–it was an incredible range of people.

BE Smart: Did you find the seminar enlightening?

Shorters: Thomas Hobbes and I fundamentally disagree. In Hobbes’s analysis of human nature, if two men want the same thing they become enemies. But that doesn’t work logically. His analysis presupposes the impossibility of sharing; it precludes turn taking. It reflects the psychology of a sociopath. There are other options [than becoming enemies]. At first, I was the only one who saw it that way, but by the end of the seminar I had converted several of the other fellows.

BE Smart: What other topics were raised?

BE Smart: What does this mean for the work of the BMe Community?

Shorters: There are intense inflection points in history–for example, right now, the U.S. is in an identity struggle. In the very near future, brown people and women will take on a larger role. For a country founded on racism to be inching closer to the day of having to depend on brown people is profound.

Read more about Trabian Shorters and his work here.