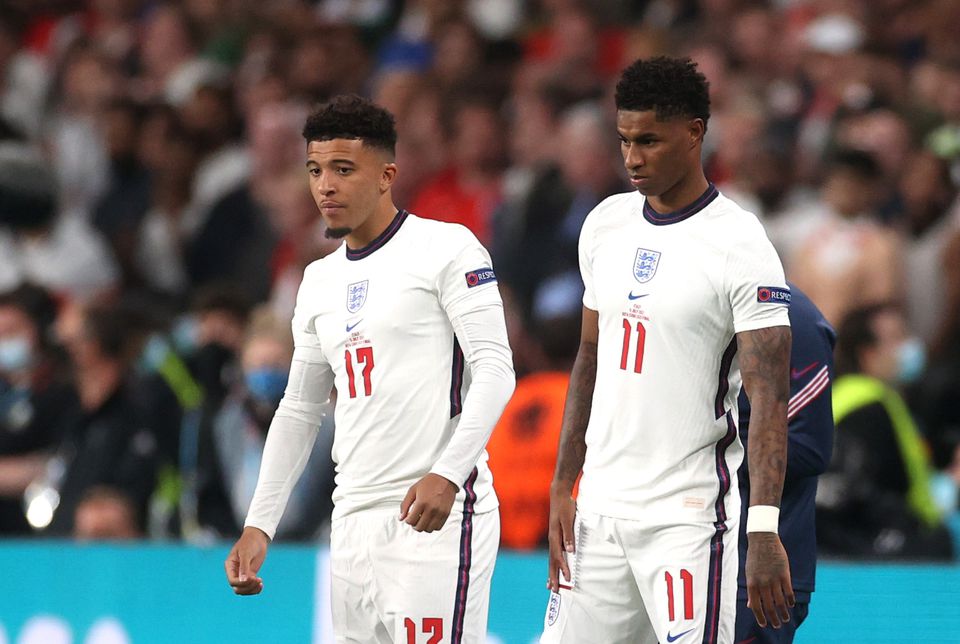 Facebook and Twitter are facing backlash over a failure to act after three Black English soccer players were subjected to racial abuse following the team’s loss to Italy in the Euro final.

Marcus Rashford, Jadon Sancho, and Bukayo Saka were subjected to significant racial abuse on both social media platforms after all three missed penalty kicks in England’s 3-2 shootout loss to Italy in the UEFA Euro 2020 Final.

The Football Association condemned the abuse the players were subjected to in a statement Sunday night saying it was “appalled by the online racism that has been aimed at some of our England players on social media.”

“We could not be clearer that anyone behind such disgusting behavior is not welcome in following the team,” the association said. “We will do all we can to support the players affected while urging the toughest punishments possible for anyone responsible.”

The abuse the players were subjected to has raised questions over whether social media and tech companies are doing enough to combat racial abuse online. Several top English soccer teams and athletes boycotted Facebook, Twitter, and Instagram for a weekend in April to protest the companies’ failure to remove racist and sexist posts.

England team manager Gareth Southgate called the abuse “unforgivable” and “just not what we stand for.”

“For some of them to be abused is unforgivable,” Southgate said on Monday according to CNN. “Some of it has come from abroad, we have been told this, but some of it is from this country.

British Culture Secretary Oliver Dowden and politician Damian Collins tweeted their displeasure at the racist comments Monday morning. Collins also took aim at Facebook, questioning the social media giant on how many accounts it deleted given its terms of service, which prohibits hate speech.

'We don't allow hate speech on @Facebook' it says in its terms of service. Can it explain how many Facebook and @instagram accounts have been deleted since last night for abuse directed at the England footballers, and how it stopped recommendation tools promoting it? @FBoversight pic.twitter.com/hrbGprK8Mj

A representative for Facebook told CNBC the company moved quickly to take down the racist posts. A Twitter spokesperson told CNN the racist abuse the players faced was “abhorrent.”