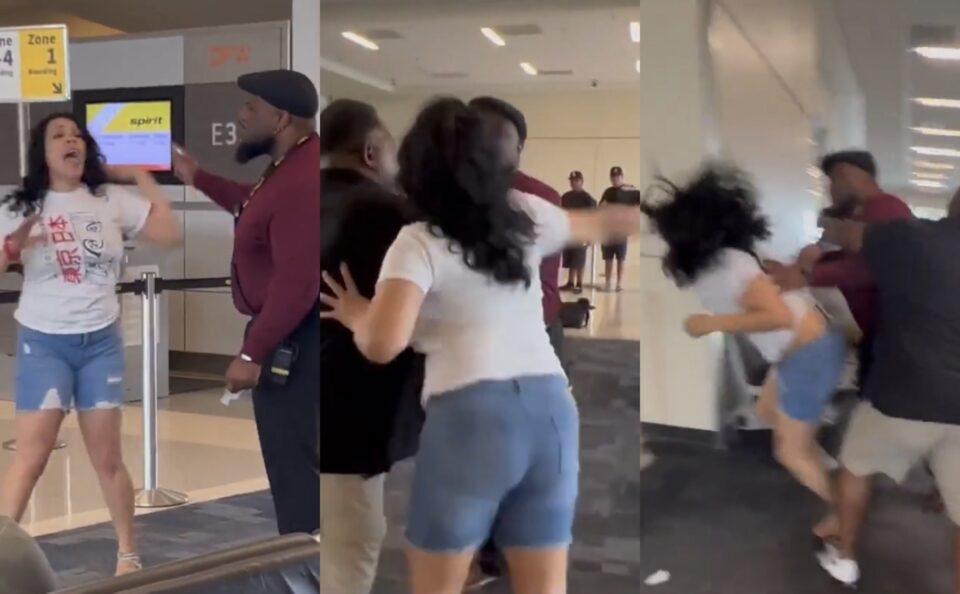 On Friday, Spirit Airlines announced the suspension of an employee who was recorded in a video that went viral Thursday, of a traveler attacking him at Dallas Fort Worth International Airport, and him fighting back.

The incident reportedly happened on July 11, but video of the altercation was recently just spread across social media, currently at almost 11 million views.

Spirit responded to the viral video: “We are aware of this altercation. Our vendor at DFW has suspended the agent. Spirit Airlines does not tolerate violence of any kind, and we are working with local law enforcement to investigate this matter,” said the statement.

We are aware of this altercation. Our vendor at DFW has suspended the agent. Spirit Airlines does not tolerate violence of any kind, and we are working with local law enforcement to investigate this matter.

The footage begins with a woman being confrontational with a Spirit gate agent, seemingly in mid-argument by the time the video begins.

“Don’t touch me ever in your life, you touch me first and then you got in my face,” yells the male employee. “Don’t ever invade my personal space.”

The woman then screams at him, “Get out of my face!” along with homophobic slurs, and proceeds to put hands on the man again.

The woman then warns him that there’s cameras recording as she continues to insult him and then shoves him multiple times again.

By this point a bystander gets between the pair, attempting to distance the Spirit employee from the woman, still calmly warning the woman that she’s still touching him and right as he’s mid-sentence saying, “If she puts her hands on me…” the woman takes her chance to reach around the other man, slap the gate agent, and runs.

The Spirit employee then charges at the woman, shoving aside the bystander and takes the woman down on the floor, striking her head as she attempts to run away again.

Multiple men can be seen walking up in the video, ready to restrain the man as he yells, “Don’t you ever put your hands on me!”

Even more chaos ensued after everyone starts shouting at the Spirit worker, a different man stepping in, repeating, “You ain’t gon fight no woman, man.”

The woman continues to taunt him with homophopic slurs as the other men shield her from him.

As the agent still tries to get to the woman, the man between them becomes controfnational and tells him to fight him instead.

The agent doesn’t back down and the two men seem to square up before the video abruptly ends.