Black Lives Matter: Staffers Walk Out of Congress in Protest 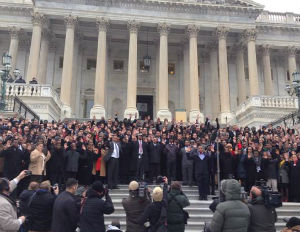 Congressional staff members walked out of their jobs in the Capitol this afternoon, in a show of unity against injustice after recent grand jury decisions involving the deaths of Michael Brown and Eric Garner. Millions around the globe have protested with die-ins, sit-ins and marches to show solidarity after these juries chose not to indict the police officers in the cases.

The staffers stood on the steps of Capitol Hill, holding their hands-up in silent protest before dispersing and leaving the premises.