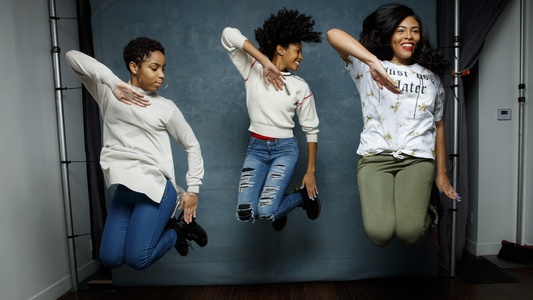 Poverty, lack of resources, and more obstacles than most adults will encounter in a lifetime can pose massive roadblocks for girls of color to achieve. For three young African American girls from Baltimore, none of these circumstances have held them back.

Recently, Fox Searchlight, in partnership with Value Partnerships, screened Step, at the Century 9 Theaters in San Francisco and Black Enterprise was in attendance. The audience waited anxiously not knowing what to expect. Was the film about dance, was it about adversity, was it meant to be inspirational, or was it all of the above?

The lights faded down and the documentary began.

During the film, we witness an in-depth look into each of these high school seniors lives as they fight to get out of their current situations, aiming for higher education as a means of escapism. We watch as they tackle adversity through the streets of Baltimore, Maryland, set on the backdrop of The Baltimore Leadership School for Young Women. While in school, we witness the ladies push to elevate the school’s step team, led by Gari “Coach G” McIntyre, which had previously been defined by a legacy of failure. We watch as they fight to change not only the team’s legacy but their own.

There was laughter, crying, and inspiration. “I’m like a notch down from Beyoncé, because I do still mess up. Beyoncé doesn’t mess up. But even if she does, she pulls it off so good and I just don’t even notice it,” said Tayla.

After the screening, I had a chance to interview the entire cast including the three lovely ladies: Blessin’, Cori, and Tayla; Coach G; the tough as nails guidance counselor, Paula Dofat; and director, Amanda Lipitz, who admittedly stated, she was unfamiliar with the depths of step but she knew dance and knew that this story was one that had to be told.

“Step taught me discipline,” said Blessin. “When I entered my first year of college, I didn’t take any step classes because I wanted to be completely focused on school.”

“That woman crying in the film, that’s not me,” said Paula Dofat. “I’m tough as nails, but I really care for these girls and want to see them succeed.”

The crowd erupted after Cori made her announcement as to where she decided to attend school and what she decided to major in. All of a sudden a bidding war broke out and every tech company in the building was vying for her attention. I don’t want to give it away but, you can use your imagination. Now I’m left to wonder where she will choose to start her professional practices.

Check out the new movie Step in theaters Aug. 4. We know some of you sorors and frats may want to go in bulk, so if you’re interested in a group sale or a theater buyout, email tamia@valuepartnerships.com #StepisLife.