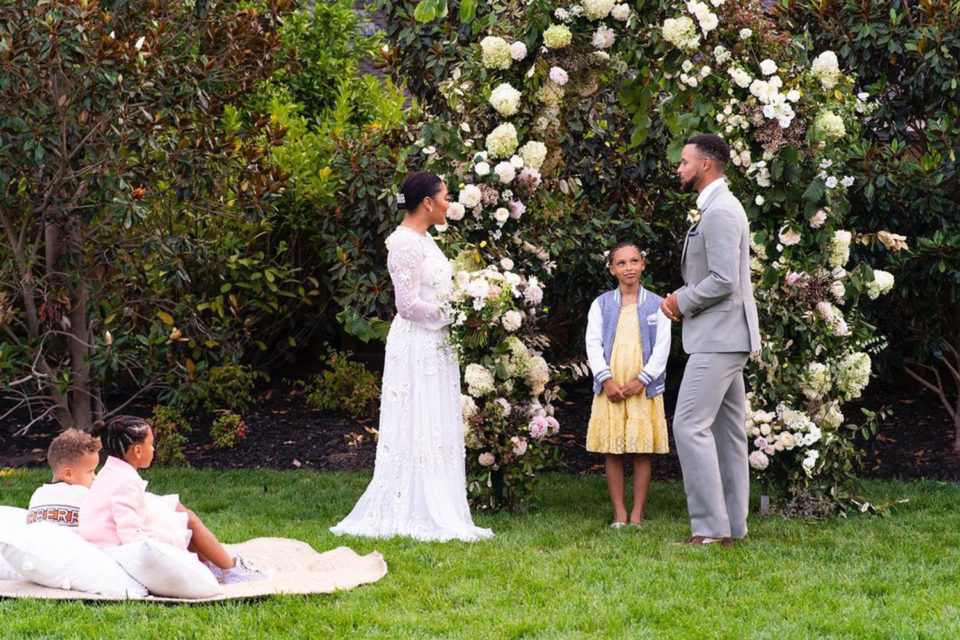 Even though Steph Curry’s parents are in the middle of a messy divorce, he took time out to surprise his wife Ayesha with a vow renewal ceremony.

In a move that proves that real love is still alive, Curry swooped in and blindsided his wife with a small wedding complete with a dress that he picked out, and their oldest child Riley officiating as the little mistress of ceremonies.

Ayesha, a best-selling author, and entrepreneur, who has been married to the NBA superstar for the past 10 years, gushed about the impromptu ceremony orchestrated by him on an Instagram post on Tuesday.

“A couple of weeks ago @stephencurry30 surprised me with the most beautiful vow renewal ceremony. He even picked out my dress for me and had it waiting 😭. Our big girl Riley officiated and Ryan and Canon walked me through the grass of our backyard. It’s everything I’ve always dreamed of but didn’t know could be possible in this way. A moment I will never forget. I love you @stephencurry30 .”

Seems like Steph is stepping up to solidify that he’s in his marriage for the long haul. Sadly he’s been getting a front-row seat witnessing the deterioration of his parents’ union as of late.

Just last month, what turned into a shocking divorce filing by Dell and Sonya Curry quickly turned messy as his parents hurled cheating allegations at each other.

Many were surprised to learn that Sonya Curry, longtime basketball wife of a former NBA player and the proud mama of two current NBA players, had filed for divorce from Dell in June. The couple released a statement to People, confirming their split after 33 years of marriage.
In court documents obtained by TMZ, Dell claims Sonya cheated on him with a former New England Patriots tight end and lied to him about it. Dell says Sonya has been dating Steven Johnson — a 6th-round pick in the 1988 NFL Draft.
Steph and Ayesha met in high school, have three kids and celebrated 10 years of marriage this year.
That’s how you do it Steph! Keep the fire burning!