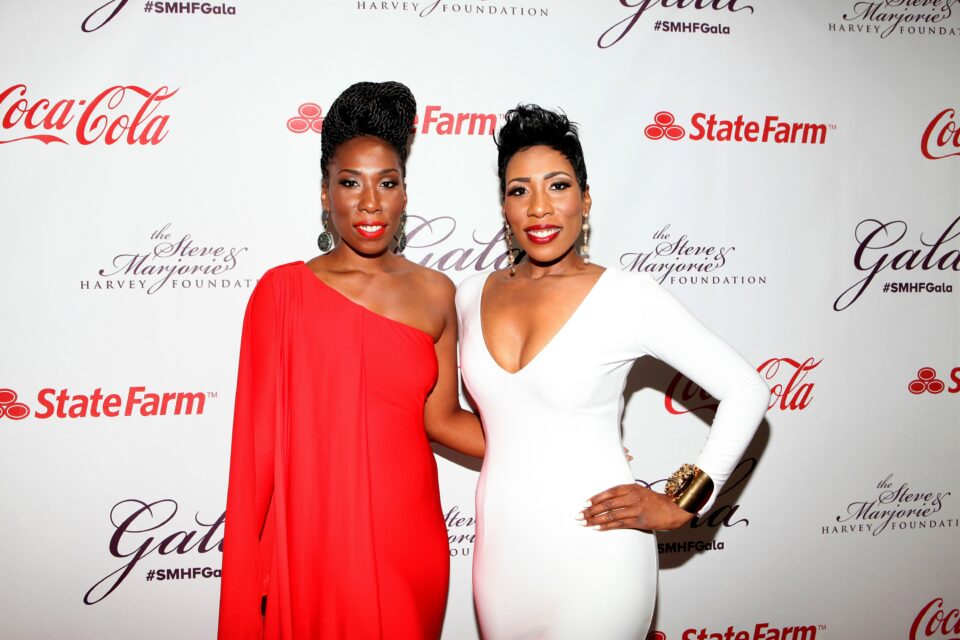 CHICAGO - MAY 03: Brandi and Karli Harvey from the Steve Harvey Foundation attends the 2014 Steve and Marjorie Harvey Foundation Gala presented by Coca-Cola at the Hilton Chicago on May 3, 2014 in Chicago, Illinois. (Photo By Raymond Boyd/Getty Images)

TV personality Steve Harvey was just trying to celebrate the birthday of his twin daughters when one Instagram user took a jab at his blended family dynamic.

The famed comedian took to Instagram on Monday to share a birthday tribute to Karli and Brandi Harvey. The twin sisters turned 40 over the weekend and enjoyed what appeared to be a joint birthday party.

The family photo showed off Harvey’s four biological children, his twin daughters and their two brothers, Broderick and Wynton Harvey.

The Family Feud host shares the twins and Broderick with his first wife, Marcia Harvey, and Wynton with his second wife, Mary Shackelford.

While most of Harvey’s followers sent birthday wishes to his daughters and applauded his adorable family photo, one Instagram user posted a since-deleted comment referencing the comedian’s blended family.

“The real bloodline….” one user wrote, as captured by Atlanta Black Star.

Harvey is stepfather to his third and current wife Marjorie Harvey’s three children, Morgan, 34, Jason, 30, and Lori Harvey, 24. With all of Marjorie’s children taking Harvey’s last name, they enjoy the benefits of being celebrity kids.

Most notable is Lori, who built a brand for herself as a model, influencer, and entrepreneur. Harvey has been married to Marjorie since 2007 and has watched the children grow up.

In March 2021, Harvey appeared on BET’s Sip N Smoke with Cam Newton and opened up about life as a father of seven.

“I’ve been through it because when I married Marjorie, Marjorie had three children,” Harvey explained.

“The challenge in that man, one time, one of them said, ‘You ain’t my daddy.’ And then my question was, ‘Ok, but where he at doe’?’ ’Cause I get tight too. Don’t step to me disrespectful because I’m doing the job.”

Harvey said that despite the challenges he’s faced helping to raise his three stepchildren, he loves all seven of his children to death.

“I would die for them,” Harvey said. “That’s what cats out here be running their mouth, you don’t understand. I will die for them.”