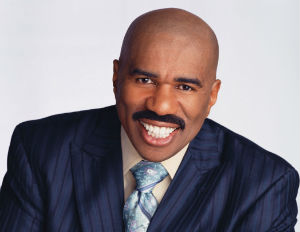 Steve Harvey, arguably the hardest working man in show biz, has now added another iconic brand to his hosting rÃ©sumÃ©: the Miss Universe pageant. He tweeted recently he’ll be the front man for the show, which has a new home on Fox after presidential candidate Donald Trump sold the rights to WME/IMG.

You’re looking at the new host of the @MissUniverse pageant. Tune in live, December 20th and let’s have some fun. https://t.co/H4r3Hj4XJJ

“I am thrilled to be hosting this iconic event for the first time ever,”Â said Harvey in a statement. “It’s exciting to be working with FOX, IMG, and The Miss Universe Organization to make this year’s Miss Universe telecast a huge success.”

This year’s pageant will be held at Planet Hollywood in Las Vegas and will air live on Dec. 20 at 7:00 p.m. EST. Harvey already hosts The Steve Harvey Show, Family Feud, and his nationally syndicated radio show, The Steve Harvey Morning Show.

WME/IMG acquired the Miss Universe franchise after Trump and NBCUniversal parted ways in a joint venture they established in 2002. The two parties had a messy falloutÂ after Trump made incendiary remarks in June about Mexican immigrants, asserting that many were criminals and “rapists.â€

Before Trump’s highly publicized comments were made, Univision had set a five-year, $13.5 million deal for the Spanish-language rights to the Miss USA pageant but dropped out of the deal, sparking a lawsuit and a settlement that included Trump getting a 51% share in the Miss Universe Organization.

After Trump sold the organization to WME/IMG, they needed a new TV partner, since NBCU pulled out. Picked up by cable network Reelz, as a one-time event this past fall, the network’s CEO indicated that Miss USA and Miss UniverseÂ “belong on a broadcast network,” and in Fox they’ve seemed to find thatÂ –Â for now.

On Reelz, the latest pageant reportedly had 925,000 viewers,Â compared with the 5.6 million people that watched it on NBC last year.

Will the move to Fox and the inclusion of ratings-drawer Steve Harvey change the game for the 63-year-old franchise? Time will tell. Fans will sure be checking for its new host, as social media had an outpouring of support for the King of Comedy being made host:

Tuning in to Miss Universe because @IAmSteveHarvey is hosting. He’s about to change the game on that night!! pic.twitter.com/doGPTW0P55

Been watching pageants since I was 5 & excited about @MissUniverse being on @FOXTV with @IAmSteveHarvey as the host! Tune in on Sun. 12.05

Fox made Miss Universe 2015 an absolute can’t miss by bringing on Steve Harvey to host.

@BlackGirlNerds If Steve Harvey hosts #MissUniverse the same way he hosts #FamilyFued, things are gonna get turn’d up.