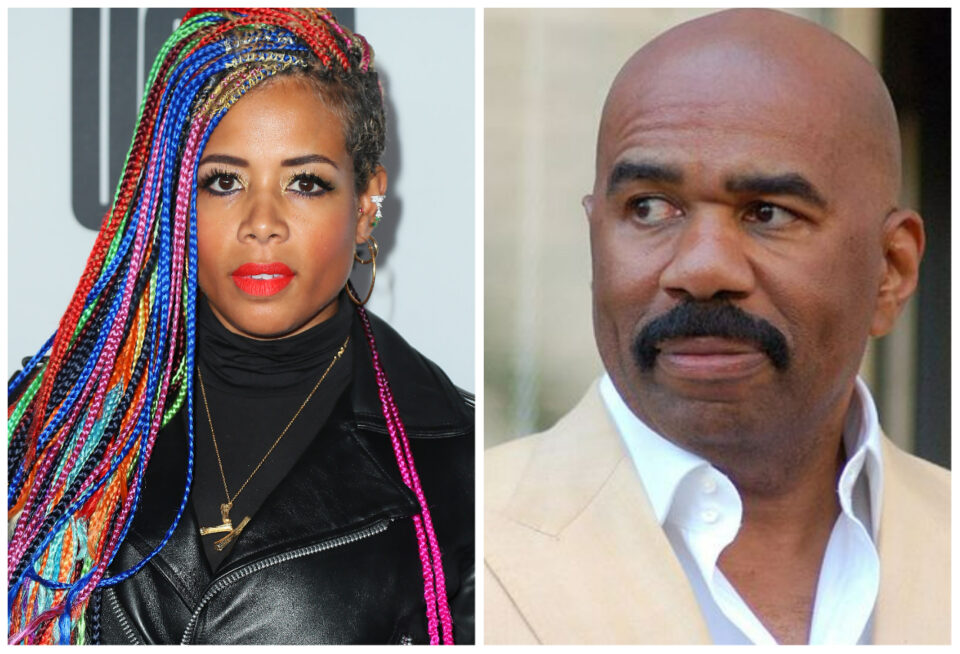 Left: LOS ANGELES, CALIFORNIA - APRIL 25: Kelis attends House Of Uoma Presents The Launch Of Uoma Beauty - The World's First "Afropolitan" Makeup Brand at NeueHouse Hollywood on April 25, 2019 in Los Angeles, California. (Photo by Leon Bennett/WireImage) Right: Credit: (Image by Angela George via Wikimedia Commons). Steve Harvey at a ceremony to receive a star on the Hollywood Walk of Fame. 13 May 2013.

Steve Harvey addressed the feud between Kelis and Beyoncé surrounding the brief “Milkshake” sample that has since been pulled from Bey’s new Renaissance album, on his radio show.

“I don’t even understand,” Harvey said in response to Kelis’ issue with unknowingly being included on the album.

Harvey credited Kelis with “probably” being “a wonderful girl” who just made a bad business decision regarding receiving credit from the likes of Beyoncé.

“Sometimes we don’t make the best decisions,” Harvey said. “Sometimes them rants could just turn into a phone call and a business decision.”

Harvey shared his belief that Beyoncé most likely wasn’t the one who decided to sample Kelis.

“I don’t even think it was Beyoncé,” Harvey said.

“But you know what Beyoncé did was ‘okay, cool take it out. I don’t want to hear nothing.'”

Kelis came under fire after she spoke out against her 2003 “Milkshake” single being sampled on Bey’s new album. Kelis’ infamous “La, La, La” had been dubbed into Beyoncé’s song “Energy.”

But with Kelis owning no rights to the Neptunes-produced track, she took issue with a song she sang being sampled without getting paid.

“It’s not a collab it’s theft,” Kelis said in her video rant. “My mind is blown too because the level of disrespect and utter ignorance of all 3 parties involved is astounding.”

“I heard about this the same way everyone else did. Nothing is ever as it seems, some of the people in this business have no soul or integrity and they have everyone fooled.”

After ranting about the sample, Beyoncé opted to silently remove the snippet and avoid crediting Kelis on her No.1 album, Variety reports. It was among the post-release edits Beyoncé made to the album in response to criticism.

In addition to removing Kelis’ sample, the Lemonade songstress also pulled the ableist term “spazz,” which was included in the song “Heated.”