Steve Harvey Stuns Social Media With His Style and Flair, Black Twitter Breaks Out the Memes 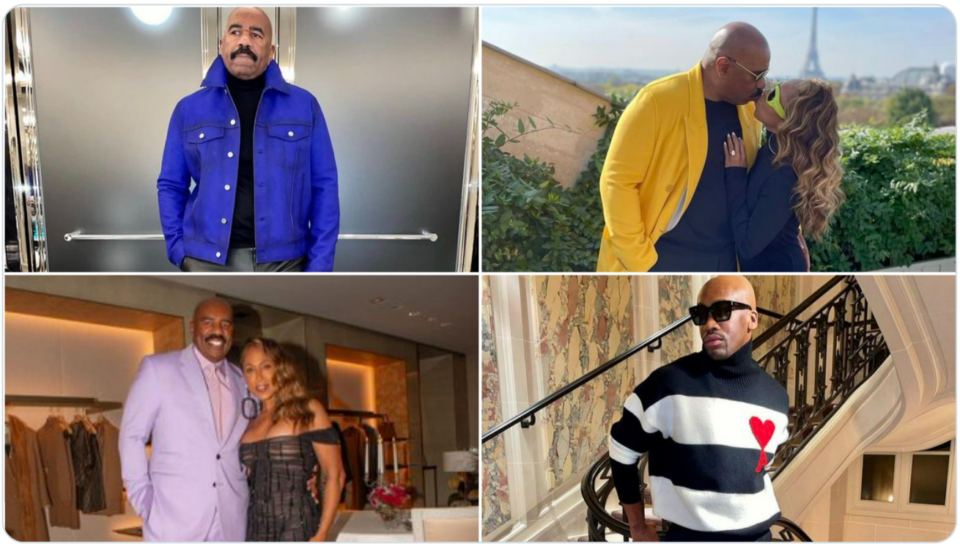 There has been a change with Family Feud host and comedian Steve Harvey, and it’s been gaining a lot of traction online.

One of the Kings of Comedy was in the fashion land of Paris and, while there, debuted several new looks that have the internet buzzing!

Harvey was in France celebrating his wife Marjorie Harvey’s birthday. The comedian appeared to show off a different and new fashion style—a change from the suited-up look that has been his hallmark. Harvey’s new style incorporates bold colors and sleek lines with trendy designer looks, all thanks to his personal stylist Elly Karamoh’s help.

In the words of Lil Nas X, can’t nobody tell Steve nothing, except his fans who’s got jokes for the comedian and added a few things to change his pictures into fun and funny memes. In one, he’s sporting Batman baddie-wear. In another, Harvey is turned into a Squid Game contestant, and he’s transformed into Captain America in yet another.

It’s a good thing that Harvey is a comedian and can take a joke! Check out his drip and how the internet responded to Harvey’s new wardrobe updates.

how it started how it ended pic.twitter.com/vuxmPUbRDN

But it took a slight turn when memes of the comedian starting popping off!

These Steve Harvey Jojo memes are killin me pic.twitter.com/aCGhA162UK

y’all are so creative with these steve harvey memes LOL pic.twitter.com/NiWQ66dIKS

“what yo ass say frieza” pic.twitter.com/ZmvS4bbna0

Why Steve Harvey always dress like a jojos character pic.twitter.com/dBZ501iR2k

These Steve Harvey memes tho pic.twitter.com/Wnd6A0t924

He knew what he was doing when he took that selfie#SteveHarvey #TikTok #Anime #squidgamenetflix #SpiderMan #Riddler #DC #MEMES pic.twitter.com/FWkYmbF0ZS

Steve looking like a VIP from Squid Game pic.twitter.com/FUDE8vhgQM