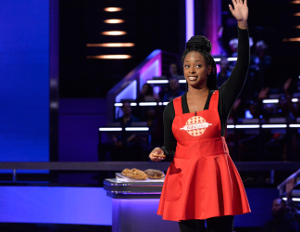 On the show, entrepreneurs pitch in a head-to-head competition to “The Funderdome” (a live studio audience) for the chance to win up to $100K in capital. The pitch that gets the most votes wins the money. Before the winner is announced, both competitors get the chance to “cash out” for a lower sum of money.

Brandon Andrews of Values Partnerships caught up with Dowell to talk about her appearance on Funderdome and her business.

How did you start your business? Tell us the Flaky Bakes story.

My grandmother passed away in 2009 from cancer and she was a baker, not by trade but by passion. She made cakes and there was always a cake at her house whenever you went over. When she died, she didn’t leave any recipes. So, she was gone and the cake was gone. You’d never think something as simple as a cake would mean so much to you, but it did.

I remember going to a restaurant and trying a cake and instantly being brought to tears because it tasted identical to my grandmother’s cake. Food is one of the only things that can evoke that type of emotion. I never thought it was until my grandmother died and I didn’t have that cake anymore. And that’s why I started Flaky Bakes, I wanted to give people that same emotion. I wanted them to remember how they felt when they tried something I made.

Piekies look delicious. How did you decide on the size of each pie?

The piekie [a cookie-sized, fruit-filled pie] was created from impatience. It was Thanksgiving and my Mom was making a sweet potato pie. I didn’t want to wait for the full pie to finish baking, so I took a small amount of pie crust and pie filling and the piekie was created. It took a quarter of the time to bake than the full-size pie. The size also makes it unique because it’s convenient and helps with portion control. If you’re anything like me and cut a slice of pie, it’s a pretty big slice. A piekie can be consumed in about four bites.

How did you feel pitching your business in the Funderdome? How did you prepare for the pitch?

I was more nervous than I thought I’d be. I remember being in my dressing room and listening to music. I would go from gospel music, because I was so thankful for the opportunity but then I’d listen to rap music, particularly DJ Khaled’s “All I Do Is Win” because I didn’t want to lose the adrenaline I was feeling. Once on stage, I calmed down though.

What did you learn from being on the show?

I gained a great lesson in patience from this experience and learned you can’t rush the process.

Andrews: Give us a post-show update. Baking is hard work; how do you scale a business like yours?

I’m currently a one-woman show. So, scaling is hard in the current state of the business, but I was privileged enough to get accepted into the Impact Challenge at The University of Michigan this past August and partnered with their first year MBA students. During the four day program, 28 students helped me develop a plan to grow Flaky Bakes in the next year by moving into a commercial kitchen and hiring part-time staff.