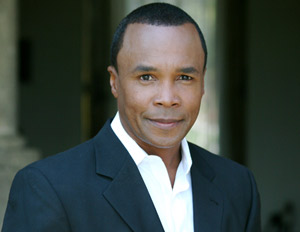 Boxing Hall of Famer, philanthropist, broadcaster, actor, author, husband, father and… robot trainer? That’s right, Sugar Ray Leonard, one of the greatest fighters to ever enter the ring, was brought on to serve as a boxing consultant for the new movie Real Steel. Starring Hugh Jackman, the action film, which took home the No. 1 spot its opening weekend with $27.3 million in ticket sales, follows a struggling, small-time boxing promoter (Jackman) who teams up with his son (Dakota Goyo) to construct a champion robot. Leonard trained Jackman and gave each of the robots their own boxing style.

Leonard’s work in cinema typifies one of the ways athletes may use their physical skills and training after retiring from their respective sport. Many more professionals, including athletes, are becoming “hybrid entrepreneurs,â€ generating income from multiple concerns instead of relying on one source that may buckle at any time. Becoming a multimedia, multiplatform powerhouse as Leonard has is no easy task, but many can learn from him and maximize their own expertise. Just in time for Black Movie Month,Â BlackEnterprise.com caught up with champion hybrid entrepreneur to discuss his transition from boxing to box office gold.

How did you get attached to Real Steel as the film’s boxing consultant?

Sugar Ray Leonard: I was approached by a friend of mine, Stacy Sneider (President) at DreamWorks who told me she had a film for me. When she described the premise and showed me the script, I was blown away. At first I thought, “How are robots going to box?â€ When I think of robots, I think big and clumsy machinery. Though after I went on set and saw how flexible and agile they were, I began to see how I could train them without a problem.

I also liked the human element that the robots possessed. The wide range of emotions of boxers was captured precisely, which I believe was a very important aspect of the film. I went to an early screening of the film with my wife, children and mother-in-law. During the film I turned one way and saw the kids getting so excited at some parts, they were going crazy! I looked at my wife and mother-in-law at other points and there were tears in their eyes. It is a great story and has something for everyone.

Have you done film consultation in the past?

I have not done any consultation in the past so I definitely received on-the-job training. I loved it though. A trainer is everything to a boxer and I was glad to have the experience of being on the “other side.â€

With the film, how much of the robots fighting style was based off of your own?

I trained all of the robots and gave them each a particular style. I gave one of the robots moves of George Foreman because it had a similar body type. I gave my own personal style to another character with a body type similar to mine, teaching it some of my signature moves.

What other projects have you done since retiring from the sport to maintain your brand and lifestyle–endorsements, investments, etc.?

I have worked with several companies acting, broadcasting, producing and motivational speaking around the world. I also had a great run on Dancing with the Stars, which was one of the best experiences of my life. I was nervous at first, nonetheless, just when I had finally gotten comfortable, my partner and I were eliminated from the competition.