This Organization Is Providing Sharp Suits to Black Men and Boys 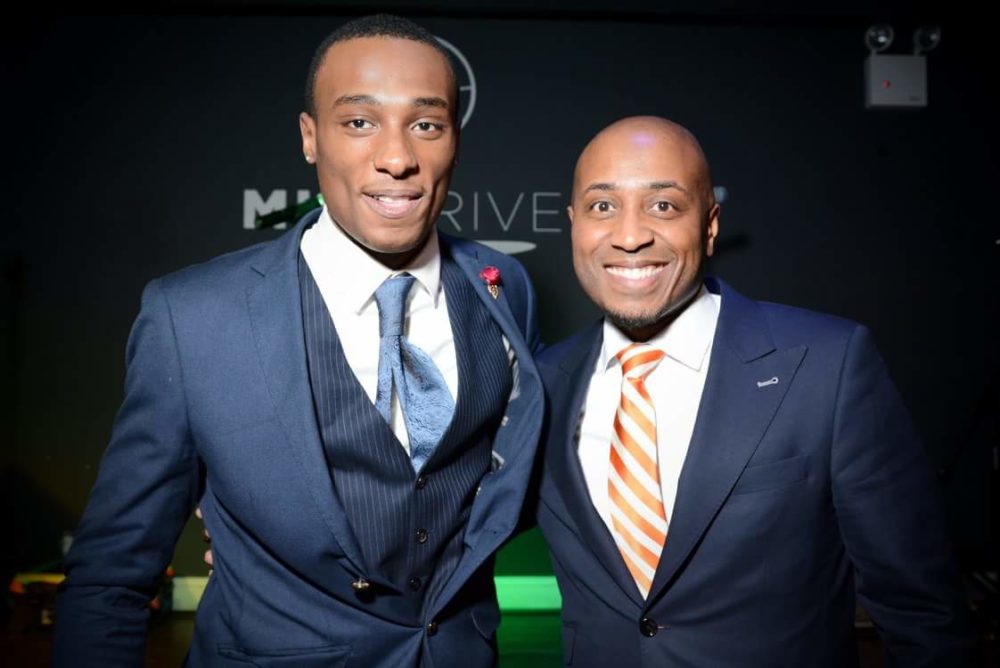 When you look good you feel good. But beyond that colloquialism, looking the part professionally, especially as a black man, is extremely important. That is why Gerard “PK” Kersey and his brother Jamael Thompson founded That Suits You to help men across the age spectrum learn the importance of being properly dressed and prepared for opportunities that present themselves. As leaders of the non-profit organization, their mission is to provide men with new and gently worn professional attire to help them get back to work and prepare for their futures. In addition to teaching boys and men how to tie a tie, they also conduct educational and life skills programming.

As professionals with more than 20 years of corporate experience, Kersey and his brother identified the lack of access to appropriate attire and not knowing the importance of image as two things that widen the opportunity gap for men of color.

“By founding That Suits You, we tried to eliminate both obstacles as far as free suits and teaching young and older men about the importance of image because being in the corporate world, we understand how important our image is,” says Kersey.

In their first year of founding their organization, Kersey and Thompson met with Alfred Edmond Jr., S.V.P./executive editor-at-large at Black Enterprise (who is affectionately known as a champion for black male excellence) and Black Enterprise President & CEO Earl “Butch” Graves Jr. for the first time after being invited to the office to share more about their initiative. That conversation led to them being invited to the Graves home where they received a donation of 50 suits, ties, and shirts on two separate occasions.

Since launching their organization five years ago, That Suits You has served 7,290 people. And this year we are proud to announce that Black Enterprise will host a special That Suits You suit drive at the Black Men XCEL Summit to increase that number! And to eliminate the high costs of shipping our host sponsor FedEx will be join us in our collective effort to make this possible.

“FedEx is proud to be the presenting sponsor of the Black Men XCEL Summit and we’re supporting That Suits You by donating the shipping services for the collection drive. Through this outreach project, Black Enterprise is giving attendees the opportunity to help other men who are trying to improve their lives and define their career paths. As one of Black Enterprise’s Best Companies for Diversity, this effort aligns with our company’s commitment to help build stronger communities by opening doors to possibilities,” Shannon A. Brown, senior vice president of Air/Ground Freight Services and chief diversity officer at FedEx Express.

The items that will be collected are:

A part of celebrating the best of who we are is making sure that others are encouraged to be their best.

“There’s something about a suit that can give a guy the confidence and pride needed to take that next step toward success. It opens his door to the world and says, ‘I’m here. I’m ready to build a life of significance.’ By donating suits during the XCEL Summit, we’re helping that ‘Man in the Mirror’ to take a look at himself in a positive way and see his own future potential,” says Brown.

Leveling up includes giving back

As a BE Modern Man, Kersey has literally made it his business to do just that.

“Sometimes we go through life and we get some form of success or recognition, and that’s good, but we have to share that with the village and other brothers who might not have the opportunity. People always say that it’s lonely at the top. But, it’s never lonely at the top if you bring people with you,” said Kersey.

As a part of helping others level up, That Suits You workshops include learning the seven-eleven rule, which is the idea that within the first seven seconds of encountering someone, they form 11 judgments about you.

“In a workshop, a young man heard that and shared that he went to an interview impromptu and didn’t have anything special to wear. So, he walked into the interview wearing a pair of jeans, a polo shirt, and a pair of sneakers.”

Long story short, after being made to feel like an outsider, the young man decided not to interview.

“So, it’s stories like that that make us push harder for them. Here’s a guy who is a deserving student who is willing to do great things but he just didn’t have the attire to match what he was wanting to do. And we were able to give him a suit. Being able to see his emotions change from being disappointed and upset to joyful and happy just because of a suit makes everything that we do worth it,” said Kersey.

Cliche as it sounds, sharing is caring

Brown believes that you can have a similar impact. “Packing an extra suit and necktie for someone who is trying to build a better life doesn’t cost you anything. When we give back, we’re making investments that can help build stronger communities. When our communities are strong and thriving, we all stand to benefit in some way. I’ve attended FedEx-sponsored programs where young men received donated suits and accessories and the looks of pride on their faces were simply priceless. Just seeing themselves in a nice suit boosted their confidence and self-esteem. At FedEx, we often say, “People don’t care how much you know, until they know how much you care.” Donating a professional-looking suit to a young man in need sends a powerful message that somebody cares.

As Kersey prepares for the impact that this partnership is going to have on his organization, he says that it’s an emotional experience, especially as he reflects on how much his late father taught him about manhood and professionalism. “Six years ago [That Suits You] didn’t exist and to have the support of Black Enterprise and FedEx to help men in the community and all around the country is very humbling.”

And we hope that you take part in the drive at the Black Men XCEL Summit. So, pack with your brother in mind!