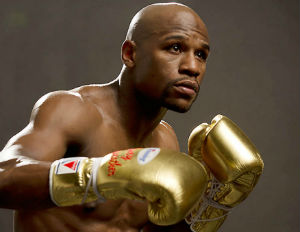 Some women may argue that Floyd “Moneyâ€ Mayweather’s overly confident attitude and A-type personality are key elements in his seductive ability to successfully gather a room full of scantily clad women for a 15 second “twerkâ€ session. However, there are at least five women that would, most likely, disagree his aggressive nature is any reflection of sex appeal.

The Huffington Post reports Mayweather’s history of battering women spanning more than 12 years, including seven documented assaults against five different women, some of them occurring in front of his children.

Mayweather is the highest-paid athlete in the world, which may explain how he’s been able to bob and weave through a host of domestic violence situations, barely being held accountable for his criminal behavior.

Last fall, when a video of Ray Rice assaulting his then-girlfriend was made public, there was a huge outcry. Sportscasters, fans, politicians, and the general public alike condemned his actions and the initial tepid response of NFL Commissioner Roger Goodell.

According to Kevin Iole of Yahoo Sports, Floyd Mayweather Jr., has been charged with domestic violence and served two months in jail in 2012 for the 2010 beating of the mother of three of his children, has never been disciplined in any way by the Nevada Athletic Commission, even though he’s fought 26 of his 47 professional fights in the state.

On Saturday, Mayweather will earn around Â $180 million for facing Manny Pacquiao at the MGM Grand Garden, where tickets are going for as high as $140,000 for a front-row seat– far more than the $135 million the federal budget allocates for the Family Violence Prevention and Services Act (FVPSA), first authorized in 1984, is the only federal funding source dedicated directly to domestic violence shelters and programs.

Some spectators feel that by paying to watch the long anticipated “good vs evil” fight you are, by default, in support of domestic violence and Mayweather’s unruly behavior. Orlando Sentinel colonist Mike Bianchi begs fans not to support.

“Don’t you dareÂ pay to watchÂ Floyd Mayweather fightÂ Manny Pacquiao on Saturday. If you do, you areÂ putting money into the pocket of Mayweather — a man who is one of the most despicable domestic abusers in the history of sports.”

But other sports fans disagree, saying they are more than capable of separating their fandom for the welterweight boxer in the ring from his personal affairs and accusations of being a brutal batterer at home.

ESPN’s, Stephen A. Smith didn’t let his one week suspension, for expressing his controversial views of the boxers domestic violence history, stop him from defending his previous statements. Smith insinuated that Cari Champion, host of ESPN2’s First Take, was only opposed to supporting the fight because she is a woman.

“OK, that’s fine,â€ Smith shouted. “I’m saying that her position is clear because she’s a woman, and this is how she feels he conducts himself. I am a boxing fan. When I’m talking about Mayweather-Pacquiao, I’m thinking about two dudes strictly in the boxing ring. And that’s all I’m doing. But Freddie Roach takes this to another level. Anybody that’s rooting for Floyd Mayweather, it’s almost like, ‘What kind of person are you.’ And when you feed into it by grasping what he says, it’s almost like, ‘What kind of a person are you.’ I’m a guy that loves boxing,” said Smith on “First Take”.

Prior to this incident, when asked how he felt about domestic violence as it pertains to his own family, Smith replied again on “First Takeâ€, “What I’ve tried to employ the female members of my family, some of who you all met and talked to and what have you, is that … let’s make sure we don’t do anything to provoke wrong actions,â€