Supporting Your Gifted Child With or Without the â€˜Giftedâ€™ Label 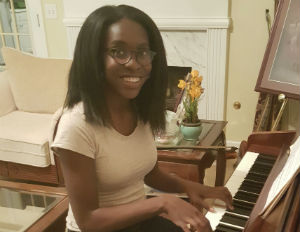 At five months of age, young Camille Trotman was already talking. “She said ‘Dada’ and ‘Mama,’â€ recounts her mother, Michelle Frazier Trotman Scott, Ph.D. At 2, Camille was talking in full sentences. After a fall, she told her pediatrician, “I have a bruise on my back.â€

Early talking and an expansive vocabulary are signs of giftedness. Although there is no universally accepted definition of giftedness, according to the National Association of Gifted Children, there are certain areas in which these exceptional children stand out from their peers. The NAGC website states: “Gifted individuals demonstrate outstanding aptitude (defined as an exceptional ability to reason and learn) or competence (documented performance or achievement in top 10% or rarer) in one or more domains. Domains include any structured area of activity with its own symbol system (mathematics, music, language) and/or set of sensorimotor skills (painting, dance, sports).â€

Although the now 13-year-old Camille was not officially recognized as gifted until just last year, even without those test results, she would almost certainly be considered an outstanding performer by most measures.

Camille’s poetry has been recognized by the National Association for Peace Education. She is president of the debate club at her school. She is on the honor roll–the lowest grade she has ever received is a B. She was selected to be trained to be a leader in the Chick-Fil-A Leader Academy, an after-school leadership development program. She is a four-time all-American in track and field. And she plays piano, receiving outstanding player awards, and is in advanced honors in her middle school’s orchestra.

Camille has tested in the 98th and 99th percentile on standardized tests since she has been taking them. Because of her outstanding scores, she has been pulled out every year to be tested. But every year she failed to make the cut–because her teachers, whose assessments were a critical piece of the overall evaluation–consistently gave her low scores.

“My daughter talks a lot–which can also be a sign of giftedness,â€ Scott says. “But the teachers may have seen it as a deficiency.â€

Scott, however, knew her daughter was gifted and made sure she was academically challenged. An associate professor of special education at the University of West Georgia, Scott’s research includes the under-representation of minorities in gifted education, the achievement gap, and parenting.

But even Scott was stymied when Camille was ready for middle school. Although she wanted her daughter to be included in her county’s challenging gifted education program and lobbied hard to make it happen, she hit a wall. Camille was slated to attend Tapp Middle School, a predominantly black Title 1 school; Camille had previously attended majority white schools. (Title 1 schools receive extra funding from the federal government based on the number of students eligible for free or reduced lunch.)

“I was very unhappy with the county then,â€ Scott recalls. But as it turns out, Camille’s experience at the school has been pivotal.

Ranked the No. 1 Title 1 school in Cobb County, named a Title 1 Award School, and designated a “distinguishedâ€ school by the Georgia Department of Education, Tapp had more black teachers than Camille had previously encountered. When they saw her test scores, they couldn’t understand why she wasn’t considered eligible for gifted services.

In the meantime, Camille continued to excel, taking Advanced Placement high school classes in the Title 1 middle school. And so last year, as a seventh grader, Camille was pulled out and tested again–and this time made the cut. The “officialâ€ designation will probably not make any difference, however, since Camille has been an outstanding performer academically, musically, and athletically without it!