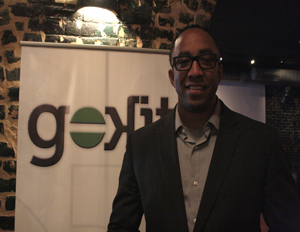 The event marked one year to the day Gokit–a digital storytelling platform, which allows users to share their experiences via multiple profiles for family, work, and friends – was conceived, and Flemings said South by Southwest marked the perfect occasion to launch the product. “There has been some historic startup launches at South by Southwest,â€ the NewMe Accelerator participant said, noting the launch of such projects as Foursquare in 2008. “You see a lot of companies doing innovative things in the technology space, and we wanted to use this festival as a platform to do the same thing.â€

The event also drew a who’s who crowd of black techies. NewMe Accelerator founder Wayne Sutton and Clickradio entrepreneur Hank Williams were in attendance. In addition, budding entrepreneurs and community members such as Blogging While Brown founder Gina McCauley dropped in.

As founder of Brand Camp University, member of the inaugural class of the NewMe Accelerator program, and BlackEnterprise.com Technology columnist, the Detroit-based entrepreneur is no stranger to the technology space. Flemings offers some advice for emerging black entrepreneurs. “We need to think big,â€ he said, noting he chose South by Southwest over other tech conferences for its international scale. “We have to make sure that we have a good product and be confident in what we do.â€

African-American entrepreneurs should focus on reaching a global audience, not just people of color, he added. “Gokit is not just for African Americans, and Facebook is not just for one specific ethnic groupâ€ Flemings said. “We have to create a product for the masses and think about products that all people can use.â€

Users can experience Gokit by signing up at http://www.gokit.me .