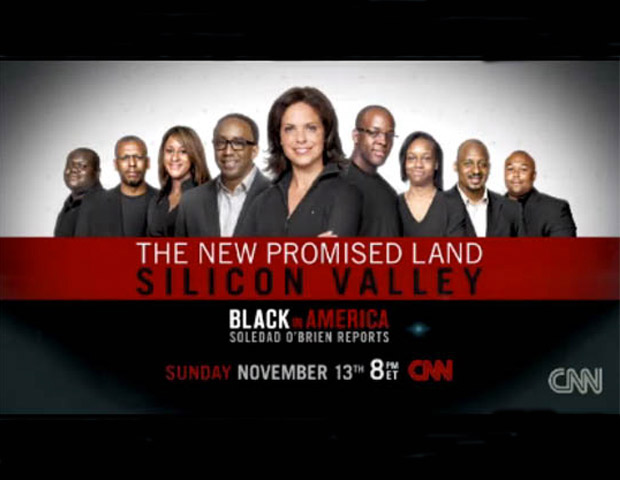 CNNâ€™s Black In America 4: The New Promised Land â€“ Silicon Valley. This documentary chronicles the journey of eight entrepreneurs in Silicon Valley in an industry where less than 1% of venture capital (VC) backed startups have African-American founders.

“CNN’s ‘Black in America’ / Silicon Valley: Aftermath” was one of SXSW’s most anticipated panels among blacks in technology.Â The panel followed up on the NewMe Accelerator, a 2011 breakout tech organization that’s gained continuous attention and support within the new media industry.

NewMe brought eight black-owned tech startups together to live under one roof in Silicon Valley last summer to fine-tune their startup ideas, hone their craft, and receive mentorship from a bevy of digital rock stars. CNN filmed a documentary about the experience for Black in America 4: The New Promised Land – Silicon Valley, and a firestorm of positive (and negative) reactions spread across the web after it debuted in November 2011.

Today Soledad O’Brien reunited with a few of the entrepreneurs to get their unfiltered opinions about the documentary and find out what has happened with their companies since the hour-long special aired.

NewMe participants Hank Williams, founder of New York-based Cloud.co; NewMe co-founder Wayne Sutton, and BlackEnterprise.com Technology columnist Hajj Flemings joined the panel to give the SXSW audience an insider’s view of their experience in their Valley home. They all made a point of reiterating that the CNN segment about their experience was a documentary, not a reality show.

The group spoke about the controversial statements made by TechCrunch co-founder Michael Arrington about not knowing any black tech founders in Silicon Valley. Some black people found Arrington’s comments to be racist, while Williams and others on the panel defended his comment. “Because of Arrington’s comments, it really made this conversation mainstream and it forced people in the industry to acknowledge the problem,â€ Williams said.

The documentary also caused black tech communities around the country to organize. Sutton discovered there were viewing parties across the country. The response was so overwhelmingly positive that Sutton and fellow co-founder Angela Benton decided to host NewMe community events in cities outside of Mountain View, California, where Google, LinkedIn, and their NewMe house were all located in an effort to mobilize people to take action.

The panelists discussed how NewMe can impact STEM education. For example, Flemings created a pre-screening for 200 high school students in Detroit. “We wanted to change the life cyle of what true success looks like,â€ said Flemings. Williams stated that the visibility of blacks in technology through NewMe and the CNN documentary will help inspire young minorities to pursue an education or career in an area they previously didn’t know was available to them.

O’Brien suggested that parents who want to cultivate their child’s interest in science and technology should find out what interests the child has and find technologies that revolve around those interests.

One audience member asked whether Silicon Valley is actually still relevant considering other cities like Austin, with strong technology ecosystems, are emerging as places to open up shop. Sutton said he and others from the summer accelerator program have moved their families permanently to Silicon Valley. Each of the panelists believed that the hype surrounding Silicon Valley is deserving given that living there places one’s company in the midst of IT giants who are more available for face-to-face networking.

Lastly, the panelists updated the audience on the progress of their startups. Things are coming full circle for participants like Flemings and Sutton who will be launching GoKit, a company they started at SXSW 2011, on Sunday.