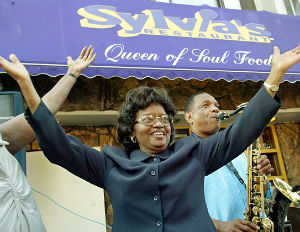 Harlem’s “Queen of Soul Food” was honored by hundreds at her emotional, tear-filled wake yesterday.

At a ceremony at Abyssinian Baptist Church, hundreds turned out to say their final goodbyes to Sylvia Woods.

Woods, 86, passed away last week. She was battling Alzheimer’s. She had been running the popular soul-food restaurant and brand for more than five decades.

Neighborhood locals, tourists, family, friends and even former President Bill Clinton and New York City Mayor Michael Bloomberg attended the ceremony to pay their respects and reflect on her impact as a businesswoman and pioneer.

According to the Daily Mail, Clinton spoke at the ceremony about how Woods’ restaurant was something he immediately identified Harlem with.

“When people came to see me from all over America and the world and wanted to know what Harlem was like, I sent them to Sylvia’s, and they were made to feel welcome and at home,” Clinton said.

Another service is scheduled for Wednesday at Grace Baptist Church in Mount Vernon, N.Y., where Woods lived, just north of New York City.