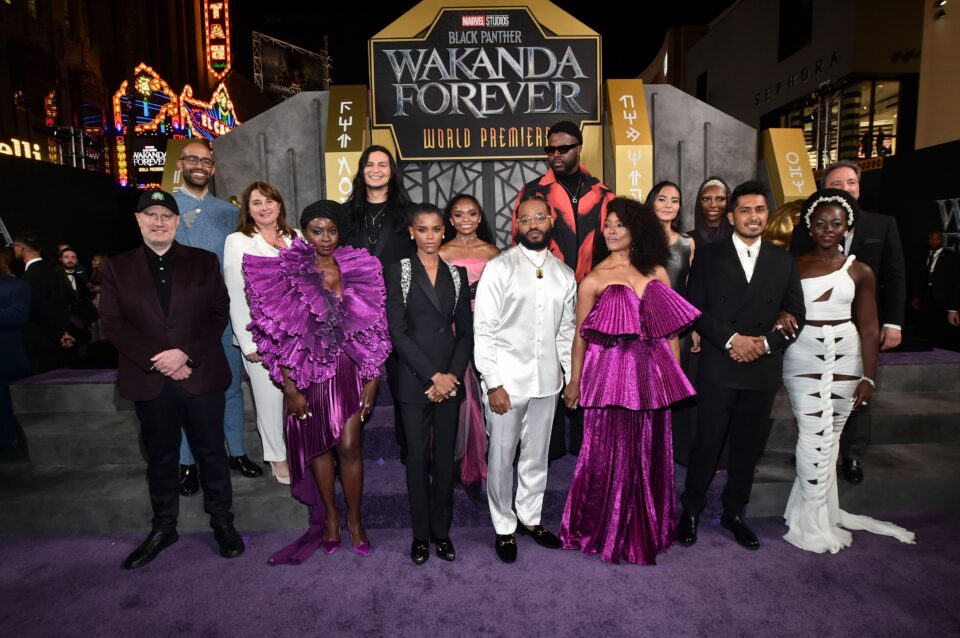 Some of the men and women behind "Black Panther: Wakanda Forever." (Photo: Alberto E. Rodriguez/Getty Images for Disney)

The world premiere of Marvel Studios’ Black Panther: Wakanda Forever was not only a proud tribute to the late Chadwick Boseman but the moment for stars and celebrities alike to serve looks like kings and queens.

On Wednesday, the highly-anticipated Black Panther sequel invited guests to a star-studded purple carpet at the El Capitan Theatre in Los Angeles that was attended by BLACK ENTERPRISE. The movie is set to hit theaters Nov. 11, and yet Hollywood has already set the mood with these melanin-popping moments.

Actress and pro-wrestler Janeshia Adams-Ginyard stepped onto the scene Wednesday night with a powerful tribute of Boseman painted on her back. A portrait of his face beamed as she completed the epic tribal look with full body paint and colorful braids.

Adams-Ginyard played a member of the Dora Milaje in the first Black Panther movie. Now her character will be called Nomble, according to People.

Boseman, who portrayed the iconic King T’Challa, battled colon cancer and died in 2020 at the age of 43.

Director Ryan Coogler dealt with the passing hard and couldn’t imagine making another Black Panther movie. But he stood strong and donned in an all-white pants suit at the premiere. He paired it with a necklace and pendant with Boseman’s face on it.

Rihanna may be busy, but not too busy to show out like she did on the purple carpet. Her boyfriend, A$AP Rocky, joined her in a color-matching ensemble and all smiles. The beauty mogul also graced the premiere to claim her vocal prowess on the Wakanda Forever soundtrack.

On Wednesday, Rihanna released a teaser of the song, titled “Lift Me Up,” which will be released by her own Westbury Road label in partnership with Roc Nation, Def Jam Recordings, and Hollywood Records, BLACK ENTERPRISE previously reported.

Another head-turning moment included Michael B. Jordan‘s controversially bright yellow wide-legged pants suit. His presence dripped in confidence, although some people have voted against his stylist.