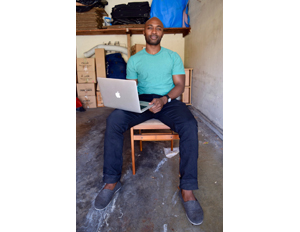 “If you’re creating or consuming independent African content, [Tammah] is created for you,â€ he says.

From Finance to Founder

The former banker left the finance world for the specific purpose of becoming a tech founder.

His first tech startup was an events app. Tammah is his most recent and most important venture.

Ejiogu lives and operates Tammah from Los Angeles, where he’s lived for the last five years. Previously, he lived in Brooklyn. He moved to the U.S. in 2003 to attend school, and has a degree in finance and investments from Bernard Baruch College, Zicklin School of Business in New York City.Â Graduating in the top-10 of his class, Ejiogu also minored in law and policy.

Tammah is Tech with Ancient Origins

“Tammahâ€ is a respelling of the word tama [tah-mah], the Senegalese name for the West African talking drum. According to the company’s website, the tama embodies the company’s vision; it imitates the rhythm and the rise and fall of words to communicate ideas, stories, and culture.

The company has an open Kickstarter campaign. It is already at 21% of funding goals.

The target audience is millennials throughout the African diaspora (a potential market share of 34 million).

While Tammah is free to use, Ejiogu’s revenue would come from advertisers seeking to reach millennials. The company hopes to eventually offer digital analytics on sales as another revenue stream.

The Tammah beta site has a number of videos that range from the latest African rap music to a beautifully shot Web series, I am Congo, with vignettes of Congolese life.