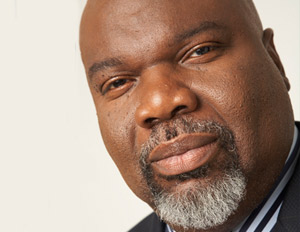 What happens when two families from divergent socioeconomic backgrounds get together one weekend in Martha’s Vineyard for a wedding and quickly find out it’s a collision of worlds? You get Jumping the Broom, Dallas ‘Mega Church’ pastor and film producer Bishop T.D. Jakes‘ new film, which shows that despite the intricacy of matrimony and difficult future in-laws, marriage is a life-long commitment. BlackEnterprise.com caught up with the senior pastor of the Potter’s House, to talk about his motivation behind producing the wedding comedy and the future of faith-based films in Hollywood. Jumping the Broom is in theaters today.

What was your motivation behind producing Jumping the Broom?

Many African Americans are interested in being able to bond with their children, their families and [want to] go out and see something together that we can all enjoy in the limited quality time that they have. Films [like this] give us a bonding moment with our families.

There are really two categories of “faith films.â€ They are those films that are written by Christians, for Christians and there are also those groups of faith films that are written or produced by Christians for the general public. I want to tear down that wall and that’s why Jumping the Broom fits into the second category. I want to dispel the misnomer that Christians or people of faith are aliens. We laugh, we have issues, and we have problems just like anybody else. There really isn’t a difference in the subjects of interest. There might be a difference of where we go for support, but there is certainly no difference in the experience of the maladies and the humors and the tragedies and the adversities of life. We’re sharing this planet together.

What about on primetime television? There are few very few faith-based shows. Is that a space you’re looking to expand into?

Well, it’s interesting that you say that. We have developed a sitcom that we are looking at and we have begun to produce some made-for-TV films for various entertainment networks that we are in the process of producing right now. So, yes we are involved, we are engaged in and want to continue to do things and to develop and to explore all the creative aspects of entertainment in general. TDJ Enterprises, the company that I own, has always been committed to entertainment, education and empowerment. So, this is just a continuation of something that we started all the way back when we started doing plays years ago.

But why are there so few faith based movies or sitcoms? Most go straight to DVD. Is there a shortage of Christian actors/actresses?

There are no shortages of industry people who are Christians. Though some “Christian films” are done outside of the guild of Hollywood, many of them are in part or in whole done from within. It is also not wise to assume that all the actors in “Christian films” are in fact themselves believers. What makes it a faith film is often its theme or its intended audience and not the cast. Most industry people understand acting to be just that. Their personal lives do not always reflect the character they portray. Still, there are certainly many gifted believers who love working on positive projects to which they could expose their family. The challenges with budgeting is more about a business decision where hard data must be considered. No one has trouble getting backing when there is a likelihood of return on investment whether it be from within or outside of Hollywood. Remember that the Passion of the Christ wasn’t funded by a typical studio deal.

What advice do you have for those who are believers and want to maintain their religious devotion without sacrificing their career goals in Hollywood?

You know, I think it’s the same challenge that we all have every day, people of faith, no matter what arena you work in, sometimes you find yourself asked to do things that compromise your core beliefs and then you have to make decisions that reflect your priorities. I think that they have to do that too. But, people outside of the industry, have to understand the difference between somebody playing a character and who they are as an individual. Because sometimes we get consumed in who somebody is portraying on stage and how they present themselves on stage and we say, “Because I saw you on stage, I know you.â€ There is a great deal of difference between the public persona or the role that people play or comedians or athletes and actors who they are on the field and who they are privately. I encourage people not to be judgmental of those people who have hard choices to make. Sometimes those choices we see on stage don’t always reflect who they are as an individual.

To read more on T.D. Jakes’ view on Hollywood’s attitude towards faith-based films, and how he gets away from the busy schedule of being senior pastor of a mega church and running his business pick up the May 2011 issue of Black Enterprise on newsstands now.