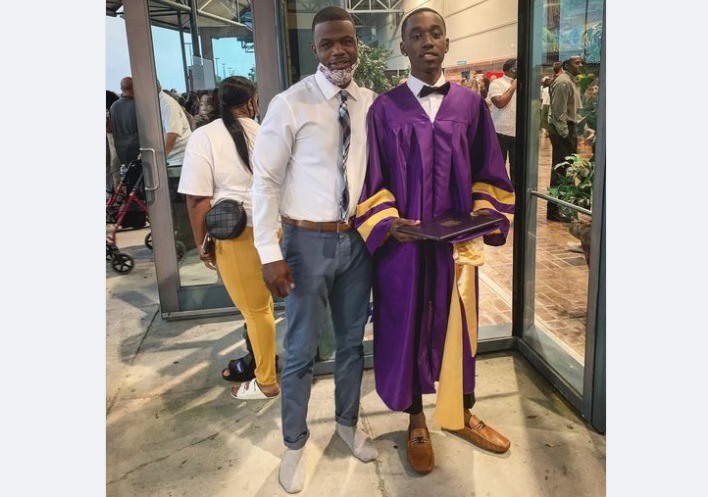 On May 20, an educator named John Butler posted a story on Facebook about the action he took to ensure that a student could walk and received the diploma he earned.  According to the story, the young man told Butler that he was told that he could not graduate,  because the shoes he was wearing did not fit the dress code. Butler took action by solving the problem, after confirming the accuracy of what he was told.

“In total disbelief I go down to confirm. And sure enough she tells me the same thing. So then it becomes a no brainer to me, a no more questions asked scenario. I gave him the shoes on my feet. Here’s the funny part tho… my shoes were 2 sizes bigger than his, so when his name was called, he had to slide his feet like Sleestak across the stage to receive his diploma😂😂😂 we had a good laugh,” Butler said on Facebook.

The quick thinking teacher later posted an image of the shoe style the student was wearing, along with a message.

What would have happened to the student on graduation day, if Butler had not been around to help out?

Sharif El-Mekki, the founder and CEO of the Center for Black Educator Development, wrote an article for Education Post about teaching Black students.

“Educators must also do the work and professional development that hones their skills as liberators, not overseers of the existing system. Without a strong sense of purpose, an educator can easily become a perpetrator of the very injustices they initially sought to dismantle,” El-Mekki said.

Although the student who needed help could have come from any demographic, EdSurge’s report about the reason why American needs more Black male teachers becomes relevant, if a student is left unsupported in a school setting.

“Despite students of color representing more than half the student population, Black males make up only two percent of the teacher workforce. So as it happens, that statistic is very significant as this lack of diversity has negative implications for all students,” EdSurge  aid.

And just maybe, the teacher who saved the day for one African American student once answered a different call to serve. If he did, not all heroes wear capes, but one who helped a young person graduate could have once worn a United States Marine Corps uniform.