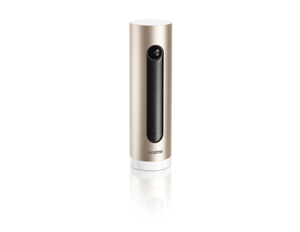 The Netatmo Welcome is an indoor security camera that has intelligence built-in.

Netatmo’s intelligent facial recognition software makes it more innovative than other security webcams on the market at its price point, although it’s not flawless.

[Related: Here’s How Ugly Things Get When You Don’t Deliver on Kickstarter]

Netatmo Welcome is stunning hardware. It’s cylindrical, made from anodized aluminum. It hardly looks like a typical webcam and is a device you wouldn’t mind displaying in the most chicly-decorated setting.

The camera has a Gigabit Ethernet port. It can also connect via Wi-Fi, albeit only at 2.4GHz.

It ships with a tiny SD card already inserted. The card stores the camera’s HD 1080p video recordings (you can control the recordings via its settings).

The camera is meant to face the entryway of a home or business because it “learnsâ€ who should be in the dwellings at which hours and who should not.

Once placed and powered on, download the Netatmo app and the app walks you through setup, which involves naming the camera and creating an account to access Netatmo’s service. An account allows remote viewing of the video feed from a smartphone, tablet, or computer.

The camera immediately starts identifying and alerting you via its app, any faces in its purview. It will ask you to identify the faces and you can also set the hours those faces should be in your home. It’s a great way to set up alerts when the kids come home from school. You will need to really work with the camera’s app initially to establish the identities of all the faces it recognizes.

Once Netatmo learns all of the faces of the members in a household, it will send alerts if anyone enters the camera’s view and isn’t recognized.

The camera doesn’t seem to recognize pets. Whenever my dog moves into the camera’s 130-degree field of view, the motion detector sends notifications to the app—a little annoying.

The camera gets noticeably warm after about 8 hours of uptime. It also inexplicably disconnected from online once or twice the first few days of testing.

It has an alarm feature that will alert if it detects a smoke or CO2 alarm–but it can’t distinguish them from a wailing fire truck or ambulance passing.

The Netatmo Welcome is available on Amazon for $199.