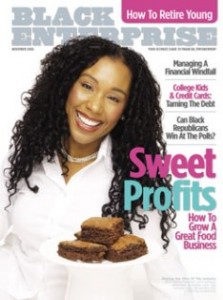 Come 2016,Â Luvs BrowniesÂ Founder and CEO Aundrea Lacy will celebrate 20 years in the business with her online bakery.”We were one of the first cloud-based, non brick-and-mortar bakeries,â€ says Lacy.

During the high-tech industry’s run in the 1990s, the former marketing executive who worked for Hewlett-Packard, among others, launched her San Jose-based online bakery business. What’s more, Lacey graced the November 2006 cover of Black Enterprise.

So, it was more than fitting for her to want to attend the first TechConneXt SummitÂ in Silicon Valley. “I’m always looking to connect at all of these conferences,â€ says Lacy. “I also come to these conferences to get inspired by other entrepreneurs and to see what their social networking is all about, and to see what other technologies are out there.â€

For the past five years she has been selling her brownies at the San Jose Giants Baseball Stadium. “We have come up with a sweet spot for the people attending the games, the players, and the coaches,â€ she says.

Lacy continues to reinvent herself and her business. When she first started the business, her signature heart-shaped brownies were a hit among chocolate lovers in the Valley, many of them former co-workers who sometimes requested up to 600 at a time. They were her primary target. But when the dot-com bubble burst, business fizzled. Layoffs and tighter budgets meant fewer calls for her desserts. Sales dropped approximately 50%.

But instead of shutting the oven off in defeat, Lacy re-branded herself by authoring and self-publishing Luv Story: From Homemade Brownies to My Own Internet BakeryÂ about her journey to entrepreneurship. That book revived her business by providing working capital. Till this day, she has never had to seek outside investors; the business has paid for itself.

Lacy is currently working on a series of workshops for aspiring entrepreneurs based on her secondary literary offering,Â Brownie Points: Seven Steps to Success For Woman Entrepreneurs from One Who Made It.Â It is a greatly expanded new version of Luv Story; one in which she answers the many questions she is often asked during speaking engagements by young people who want to start their own businesses. Constantly seeking multiple streams of revenues, Lacy is focusing on providing more services to her customers. “It’s always a hustle,â€ notes Lacy. “That’s the life of the entrepreneur.â€