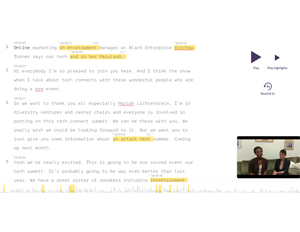 A new web app called Trint attempts to lessen the pain points of transcribing audio recordings to text. Its auto-transcribing and on-the-fly editing capabilities put it ahead of the pack of many other transcription software solutions, but it does not quite offer flawless transcribing.

There is perhaps nothing a journalist or anyone who has recorded a class lecture or business presentation dreads more than transcribing audio recordings to text. The play, stop, write, repeat motions are tedious and inefficient at getting audio recordings translated to text.

There are plenty of transcription services and software available. Most of them require you to read the audio recording in your own voice so that the software can become accustomed to your unique pronunciation and inflections.

That, however, adds an extra step in converting audio to text. And most of us want to directly convert recordings of others talking.

Trint is an artificial intelligence-powered transcription service. Currently in beta, you can upload recordings in a variety of different formats and from different sources including MP4 and WAV files; and files stored in Google Drive, Amazon Cloud Service, Evernote, Dropbox, and more.

Once your file is uploaded,Â Trint begins to automatically transcribe into text. It supports American, British, and Australian accents and transcribes in three languages: French, Spanish, and German.

After the transcription process ends (indicated by an on-screen status as well as a message sent to the email you use to sign up for the service) you open the file. The transcribed text appears on-screen next to controls to playback the uploaded audio or video.

As the recording plays, you can follow along with the text to check for any errors. A sound bar at the bottom of the screen lets you know where the text is in relation to the recording.

The integration of both the transcribed text and uploaded file within the app allows for very easy, on-the-fly editing–simply pause the recording when you want to make corrections.

I tested uploading a 70 MB video in MP4 format. Out of 317 transcribed words, Trint had an error rate of 8.5% incorrectly transcribed words and phrases. Not a bad rate. A recording with virtually no background noise is likely to result in better transcription.

Still, Trint, even in beta and with some issues in transcription is a very promising solution for audio-to-text transcription.