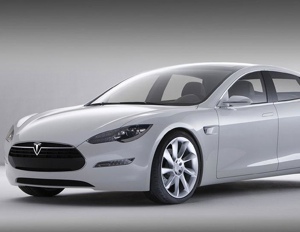 Adam Jonas of Morgan Stanley recently raised his price target of Tesla Motors from $153 to $320, according to Business Insider. The move boosted Tesla’s stock, which reached a high of $258.94 today before closing around $247. The move comes on the same day Consumer Reports named Tesla Best Overall Car of 2014.

Consumer Reports tested an $89,650 Model S before awarding it Best Overall Car of 2014.

“The Tesla is brimming with innovation. Its massive, easy-to-use 17-inch touch screen controls most functions,” Consumer Reports says. “And with its totally keyless operation, full Internet access, and ultra-quiet, zero-emission driving experience, the Tesla is a glimpse into a future where cars and computers coexist in seamless harmony.”

The Model S is the only all-electric car to win an award in Consumer Reports’ Top Picks of 2014.

Elon Musk, CEO of Tesla Motors, has plans to increase weekly production rates of the automobile from 600 to 1000. There is also talk of a “Gigafactory,” Tesla’s own factory for building its battery packs which is currently purchases from Panasonic. More information on the new factory is on its way, says the company.

The announcement is a seemingly welcome one. The all-electric luxury sedan has been caught in a firestorm of negative attention over a recent slew of incidents where the Model S caught fire, though that doesn’t seem to have affected analysts’ outlook on its future.