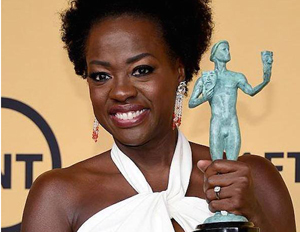 “When I tell my daughter stories at night, inevitably, a few things happen. Number one, I use my imagination. I always start with life and then I build from there,” the teary-eyed actress said. “And then the other thing that happens is she always says, ‘Mommy, can you put me in the story?’ And you know, it starts from the top up.”

The perfect build for her following remarks, Davis, who won for her role as Annalise Keating on How to Get Away With Murder, thanked Shonda Rhimes and others “for thinking that a sexualized, messy, mysterious woman could be a 49-year-old dark-skinned African-American woman who looks like me.” A resounding applause, mixed with a few screams and whistles, erupted from the audience. Davis ended her speech by thanking the Screen Actors Guild and “all the people who love me exactly how God made me,” which she affectionately shouted out as her husband Julius, her 4-year-old daughter Genesis and her mother Mary Alice Davis.

Davis’ eloquent address comes right on time, shortly after the Internet went a-buzzing when a New York Times contributor referenced Rhimes as “an angry black woman” and Viola Davis as “less classically beautiful than Ms. Washington, or for that matter Halle Berry…”

The issue of narrow beauty standards has been a hot topic lately, even among hip-hop artists who, ironically, have long been called out for their praise of non-black women and womenÂ reflective ofÂ Eurocentric features. In “No Role Modelz” off his latest album 2014 Forest Hills Drive, J. Cole raps, “I want a real love, dark-skinned Aunt Viv love. That Jada and that Will love.” He vents his frustrationÂ about howÂ he missed out on Lisa Bonet and Nia Long, and is consequently left with controversial reality starlets. His hip-hop comrades Wale and Kendrick Lamar shared similar sentiments,Â both making conscious decisions to stray from rap’s traditional videoÂ vixen andÂ opt forÂ more natural-looking beauties in their music videos.