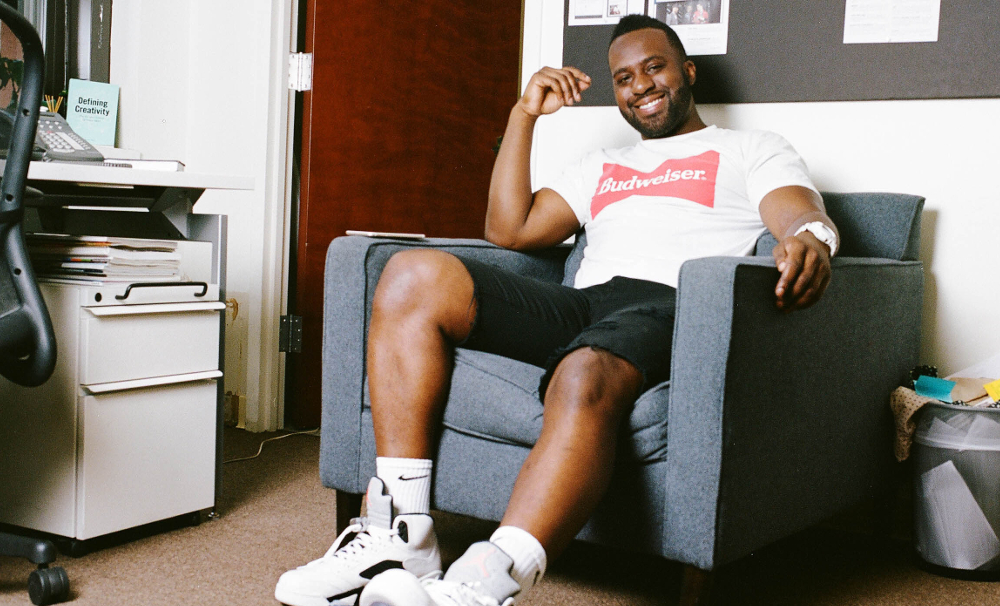 I have  changed/contributed to my industry by: Staying honest to myself and what I believe is best for youth culture and those that come after me.

Former online editor of TheSource.com and Senior Editor at Hip-Hop Wired Kazeem Famuyide has taken his talents to create and head the new online platform STASHED. Throughout his career in publishing, Famuyide has seen it all. “I’m truly not afraid of anything when it comes to this business,” Famuyide tells BE Modern Man. But seeing people go through everything that is real in the industry has never swayed him from taking on any challenge. “All of this doesn’t mean much to me. If my career all went to hell, I’ll go back to Staten Island and live with my family and be just as happy. I’m never scared to take any challenges professionally, and thankfully, that’s worked out for the best.”

Launching the print edition of STASHED has been far and away Famuyide’s greatest achievement in his career both personally and professionally. “We didn’t have a ton of believers when I first started it,” says Famuyide. “When I was hired by Translation LLC to help create an editorial property, a lot of people didn’t think it would work because people in the agency had tried before. To most within the organization going to print was the “dummy” mission of the agency and whoever stepped in to this territory would ultimately fail. Tapped by his peers as the next hired to fired guy, Famuyide took on the challenge. “We stand here over two years later with a Webby nomination to our distinction, one of the most influential cultural blogs, and the creation of a beautiful print publication in a time where it’s not easy to create convicting print properties.”

If it were easy anyone who was tasked with creating a print property would have excelled. This is what separates the leaders from the rest of the fray. A willingness to go after a task regardless what may have happened in the past. “I don’t know, but somewhere along the way people found it uncool to try,” Famuyide tells BE Modern Man. “Not everything I’ve done was a success and I’ve failed before. But who cares, trying is half the battle and there are so many scared people out there that trying turns them away from even realizing their full potential.” Famuyide and a couple of friends thought it would be cool to try and create a recording studio in Harlem, and they did it. “My friends and I decided it would be cool to try and take our little house party called HennyPalooza on a country-wide tour and we did that. We don’t really have experience in any of the particular fields but so what, we are trying. That’s what it’s all about.”

From a small town in Staten Island, Famuyide says that there are a lot of people who really never venture outside of that borough. This is draws a parallel to his family who is from a small village in Nigeria. “They don’t even fathom the type of things that I do here in America,” Famuyid tells BE Modern Man. “Respectively, I would like to bring more culture to Staten Island and show people certain things can be done there.” Going back to Nigeria with his mother and father to learn more about the culture is also something that he plans to do. “Those things don’t really directly correlate with what some would specify as “career goals” but I feel like growing yourself as a person and never forgetting the person you are and where you come from is essential in furthering yourself as a businessman.”

Cultural understanding is vital as Famuyide and his team at STASHED grow the print business through their advertising and marketing efforts. “I was a huge fan of the “Straight Outta” campaign that Beats By Dre started this year,” says Famuyide. “I’m a huge fan of viral marketing, and when you can tap into the subconscious of the consumer to make them feel like they are personally a part of a campaign and they have vested interest in it, you’ve achieved something remarkable. The “Straight Outta” campaigns not only celebrated individuality by using photos of yourself, but celebrated where you come from and in-turn, who you are and what makes you tick. It was brilliant.”