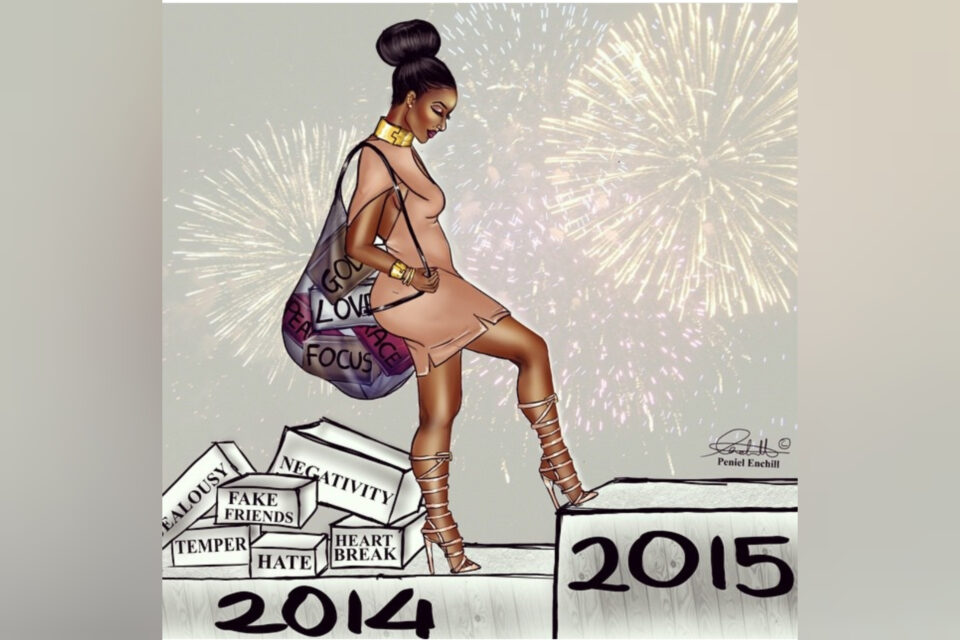 Another new year, another round of edits of the now infamous ‘Stepping Into The New Year’ illustration that has been blessing Twitter and Instagram since 2014.

But British-Ghanaian graphic artist Peniel Enchill, the woman who sketched the original image, would like the world to move on, especially since many of the edits she’s scene of her original drawing are negative, she tells BuzzFeed.

Enchill attributed the original 2014 image to an moment of inspiration.

“I did that artwork in hours. It usually takes me a while to finish up an illustration,” she recalls. “But I had what I like to call these days a ‘download,’ where you literally see the picture in your mind and it’s just a matter of transferring that image from your mind to the paper. I rarely get that, but that was one of them.”

Within 24 hours of posting the original, which now has 18,961 likes, Enchill’s IG following had increased by 40,000 people and her timeline was almost full of reposts and screenshots of her work. Unfortunately, a lot of the reposts had been reimagined with a slightly negative tone.

“All I could see was the negative, she says. “Yes, there was positive feedback, but it was clouded by a lot of negative and I took it quite personally. “My brother being my brother was like ‘Why are you upset? Have you seen how many followers you’ve got? Have you seen how many people have seen it? It’s all over Twitter. “I think it took me a whole day or two to start seeing the positive sides.”

Now at 270,000, Enchell says her page gets renewed attention each year around this time. Yet any of her updated New Year illustrations have yet to match the popularity of the original, which has even piqued interest in the metaverse with creatives in that space suggesting she turn it into an NFT.

“I don’t think I’ve come to a comfortable place with that yet,” she said. “I might just have to do one to see how I feel about it all, but I’m not 100% sold on the idea yet.”

In the meantime, the OG reigns supreme.