Voting Rights Act 2014: The Battle for Our Ballot Box 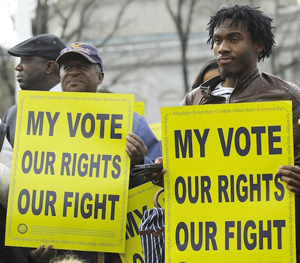 A year before the 50th anniversary of the Voting Rights Act of 1965, we still must fight to protect our franchise. However, legislative action is now being taken to strengthen the law.

Rep. John Conyers, the Michigan Democrat who is the longest-serving African American in Congress; Rep. James Sensenbrenner, a Wisconsin Republican who authored the Patriot Act; and Sen. Patrick Leahy, a Vermont Democrat, introduced a bill Thursday to revive VRA, whichÂ had beenÂ effectively dismantled by a Supreme Court decision several months ago.

In the 5-4 decision on Shelby v. Holder last June, the Supremes struck down a key provision, stripping the VRA formula that Congress has repeatedly reauthorized to determine all or jurisdictions of states — many located in the South — that would require federal approval before changing election laws. States with a history of discriminatory practices like literacy tests and poll taxes were forced to gain pre-clearance by the feds before making any adjustments.

Chief Justice John Roberts, a long-time VRA critic, wrote in Shelby, which challenged the 2006 re-authorization of Sections 4 and 5: “Voting discrimination still exists; no one doubts that…The question is whether the Act’s extraordinary measures, including its disparate treatment of the States, continue to satisfy constitutional requirements.â€

Asserting the formula used “40-year-old dataâ€ to police modern voter discrimination, he further concluded: “While any racial discrimination in voting is too much, Congress must ensure that the legislation it passes to remedy that problem speaks to current conditions.â€

But the court’s decision still gave Congress the leeway to update the formula with fresh research and bolster oversight of jurisdictions with a persistent and recent track record of discrimination.

Legal scholars found the voter ID provision as a gaping hole in the law,Â avoiding one of the major voter suppression issues of the day.

In fact, it appears that voter ID restrictions were totally sidestepped to preserve the bipartisan coalition. After Attorney General Eric Holder maintained that such laws constituted “a modern poll taxâ€ last year, conservative co-sponsor Sensenbrenner claimed the nation’s top law enforcement official was “politicizingâ€ the issue.Â When the Justice Department challenged Texas’ voter ID law last August, the Wisconsin congressman then urged Holder to withdraw the suit andÂ argued that the case would make it harder “to pass a bipartisan fix to restore the heart of the VRA.â€

Sensenbrenner, like much of his Republican brethren, claim that voter identification rules are not akin to Jim Crow and other such voter suppression practices. However, it has been repeatedly demonstratedÂ that voter ID has disproportionately and negatively affected African Americans, Latinos, women, the poverty stricken and Millennials.

A day after the new bill was unveiled, The New York Times reported that a Pennsylvania state judge struck down a nearly two-year-old requirement — considered one of the nation’sÂ strictest—for nearly 8.2 million voters to show photo identification before voting, setting the stage for another battle before the state’s highest court. Democratic Judge Bernard L. McGinley of Commonwealth Court wrote that the statute places an unreasonable burden on those seeking to exercise their franchise. (The law was pushed by the Republican-led Legislature and signed by the state’s Republican governor in 2012.)

The report revealed that during the 12-day trial, the plaintiffs, whichÂ included the NAACP and League of Women Voters of Pennsylvania, testified regarding difficulties in receiving new voting identification cards before the 2012 election.

The NAACP Legal Defense and Educational Fund, Inc. (LDF) has commended members of Congress who introduced the legislation. “Although not perfect, this bill is an important first step,” Sherrilyn Ifill, LDF’s president and director-counsel, said in a statement. “Our common aim is to ensure that all Americans can participate equally in the political process. The bill released today provides an excellent starting point for public engagement in this process.”

Interim NAACP President and CEO Lorraine Miller was wary of the move, asserting that her organization “appreciates that the U.S. Congress has made a bipartisan effort to update the Voting Rights Act, however we have serious concerns about the ability of some provisions in this bill to protect ALL voters from discrimination at the polls…From the exceptions for voter ID laws to decreased preclearance coverage to increased reliance on costly litigation, there are essential revisions and amendments to this bill that must take place to ensure ALL voters have fair and equitable access to the ballot box.â€

Although it will be some time before the measure is enacted, now is the time to make our voices heard. Compromising our franchiseÂ in any way so Congress can claim bipartisanship in an election year is not acceptable. In fact, we should be prepared to exert as much pressure as possible on our representativesÂ to ensureÂ full protection of voting rights. As I stated several months ago when the Supremes ruled on VRA, we must strongly share our concerns via phone, e-mail and social media platforms as well as engage in shoe-leather protests, if necessary.

It’s been roughly 50 years sinceÂ we have gained the right to vote after nearly a century of Jim Crow.Â Bottom line: We must remain relentless and vigilant to protect our participation at the ballot box.