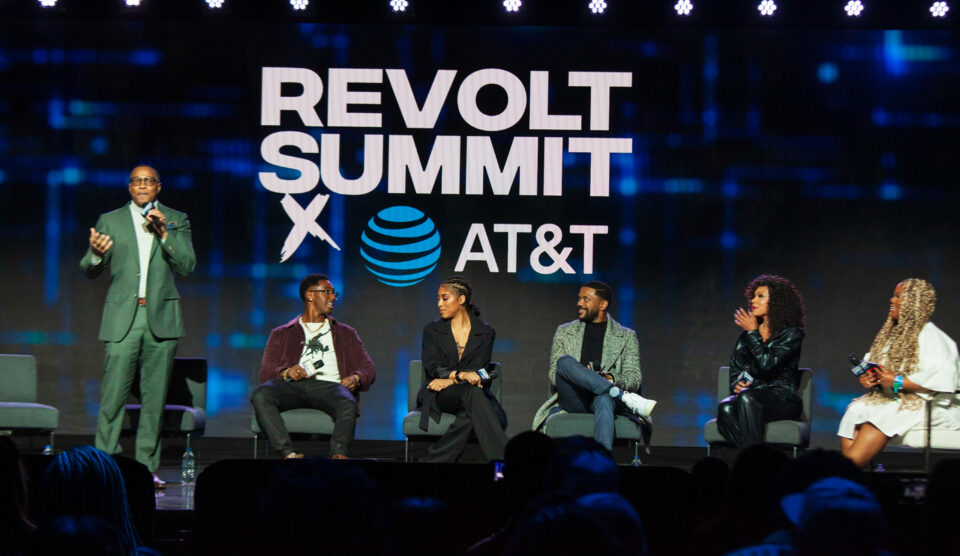 The cast of "The Game" speaks at the 2021 Revolt Summit in Atlanta, GA (Photo credit: Sheretta Danielle Photography)

After a six-year hiatus, TV fans are getting back into The Game with an all-new season of the popular comedy-drama series, which premiered on Paramount+ on Nov. 11.

The Game, which explores racism, classism, sexism, and mental health through the lens of professional football players and their families, first debuted in October 2006 on the CW network as a spin-off of Mara Brock Akil’s beloved Girlfriends series. The dramedy lasted three seasons on the CW before it was canceled and then relaunched on BET in 2011 to a record-breaking 7.7 million viewers. The Game ultimately averaged 3 million viewers per episode and became the No. 1 scripted cable sitcom among adults 18-49 for six seasons before ending its run in 2015.

The Game is recognized as a pioneer in modern-day African American-led sitcoms on mainstream networks like ABC’s black-ish, which debuted in 2014, and Fox’s Empire, which debuted in 2015. Today, IndieWire reports that there are over 70 programs with Black creators or show-runners, including ABC’s Queens, BET’s Twenties, HBO’s Insecure, Freeform’s Grown-ish, CW’s All American, and Fox’s Our Kind of People.

However, unlike previous seasons, The Game returned to the big screen under a paywall. Though the base subscription is just $4.99 a month, Paramount+ is competing against larger streaming service providers like Netflix, Hulu, and HBOMax+. Paramount+, which rebranded from CBS All Access in March since it first launched in 2014, also competes with newer platforms like Disney+ and NBC’s Peacock for a piece of the $50 billion streaming market pie. To give a sense of scale, ViacomCBS’ Q3 earnings report boasted 46.7 million subscribers across all of its streaming platforms (including Paramount+, BET+, and ShowTime), compared to Netflix’s 214 million subscribers worldwide.

BLACK ENTERPRISE spoke with some of the cast members at the Revolt Summit in Atlanta, where they made a special appearance and hosted an exclusive screening and talk.

“One thing that I’m excited about this season that we haven’t really seen before is the actual in-game footage of the players playing, the physicality, [and the] authenticity of what it really means to be a professional athlete,” Hebron told BE.

Sandeman elaborated with what Chanchez described as a “humble flex.”

“When we were going through the process of getting the role, Greggory wanted to know about my athletic background,” said the English actor. “I was part of the British Olympic Team….No. 1 in Britain, No. 1 in Europe, top 5 in the world…Usain Bolt, holler at ya boy!”

Along with sports, the new season will tackle complex issues, including mental health and the ongoing pandemic and its effects on the Black community.

“I think globally what we’re tackling really well is mental illness, especially coming out of COVID,” said Robinson, who plays a central character in the revamped show. “It’s the aftermath of all of that…and it’s something that we don’t talk about as a community, and I’m so glad that it’s a lens that’s being shown.”

Chanchez echoed, “It’s something that is really prevalent in our society today, not only with athletes but with Black men in general — no, with all of us.”

Rae, who is new to the show, said she feels at home with the cast. “They brought us in…made us feel like family…let us know that this is a safe space, this is our home, too. And that is very important because I am playing a role which has been played by two other actors.”

She went on to highlight the importance of having a presence at the Revolt Summit. “The reason that pairing with Revolt is so brilliant is because they pour back into our culture. And, as a culture, we need to learn to pour back into ourselves more often,” said Rae.

Excited about the tenth season, Robinson ensures fans another successful season, saying the energy among the cast is “infectious” and will translate on screen. “You’ll feel it. You’ll see it.”

You can find more exclusive content and videos from the Revolt Summit on the new REVOLT App.