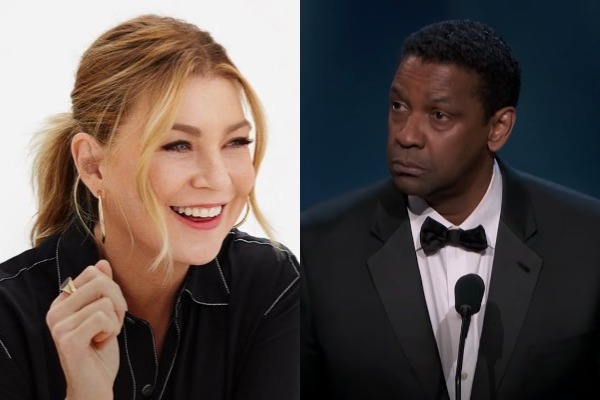 Actress Ellen Pompeo is on the receiving end of Black Twitter’s wrath after the Grey’s Anatomy star had the audacity (caucasity) to seemingly boast about the argument she had with the one and only Denzel Washington.

While speaking on her podcast Tell Me With Ellen Pompeo, she recalled a heated exchange she got into with Washington when he directed an episode of Grey’s Anatomy, Newsweek reports.

During the season 12 episode, Pompeo went off-script to tell another actor what they should do to strengthen the scene in her opinion. But the Oscar Award-winning actor/director Washington wasn’t here for Pompeo’s interjection.

“Look at me when you apologize—look at me!'” Pompeo recalled shouting at her co-star. But Washington stopped rolling to intervene.

But offended by Washington’s criticism of her performance, Pompeo let those true colors shine through.

“I was like, ‘Listen, motherf*****, this is my show. This is my set. Who are you telling? You barely even know where the bathroom is,” she said. “Denzel’s a movie star, right? He doesn’t know s*** about directing TV.”

However, once Black Twitter caught wind of the interview, they let Pompeo have it in the name of Coach Carter, Malcolm X, and Aunty Pauletta Washington.

“The tl eating ellen pompeo up and i can’t defend her this time bc she was wrong and why you telling us the story unprovoked like it’s tea,” one person said.

the tl eating ellen pompeo up and i can’t defend her this time bc she was wrong and why you telling us the story unprovoked like it’s tea pic.twitter.com/uGTg3QZe94

“Marrying someone Black does not give you a Pass. Having bi-racial kids does not make you know the experience. You are still YOU. This tweet is for Ellen Pompeo,” added someone else.

Denzel Washington: Ellen can you move slightly to the left..

Ellen Pompeo : DO YOU KNOW WHO TF I AM?! This is MY SET! THIS IS MY SHOW pic.twitter.com/zduokIDJ6A

Ellen Pompeo really disrespected Denzel Washington and proudly told the world like we were gonna be on her side… pic.twitter.com/oZpmVoO6L4

While Pompeo likely told the story to bring attention to her new podcast, she got a hard lesson on what can happen when you rub Black Twitter the wrong way.