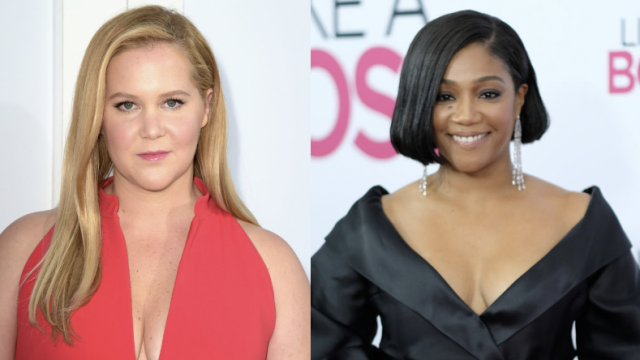 Somehow comedian Amy Schumer missed the memo that everybody’s BFF, Tiffany Haddish, has a Beyhive of her own that won’t stand for subtle, back-handed jabs in the same way Beyoncé’s superfans will sting haters who have something negative to say.

While Schumer is known for her sarcastic quips that have garnered her success as a high-profile comedian, her recent snappy remark aimed at Haddish wasn’t received well online.

Schumer recently appeared on The Shop with LeBron James, Don Lemon, Fat Joe, and others where discussions around race, gun violence, and women’s rights took place. There was a point where Lemon stressed the importance of Black vulnerability in the media when Schumer interjected.

“This is totally off-topic,” she said. “But I think it’s the opposite for women and female comics.”

The Trainwreck star went on to explain her love for Lil Kim but also felt like the rapper downplays a part of herself publicly for the sake of her career. Schumer said she and other female comedians like Chelsea Handler and Moms Mabley have to make jokes about being “a drunk” or a “fat whore” to be well received by the public

But when Lemon countered her argument and mentioned Tiffany Haddish as a female comedian who is “breaking the mold and not doing that,” Schumer shot back.

“I love Tiff,” Lemon said in defense of the Girls Trip star.

“I love Tiff, too, she’s incredible. She’s had a huge meteoric rise. I’m wondering if people are going to get pissed at her,” Schumer said.

Once the clip was shared online, Schumer was obliterated by fans who felt like she was subtly shading Haddish.

“THE CAUDACITY!!! Is Tiff worried about you? NO!” another user commented.

“They continue to show the privilege and don’t care,” added someone else.

“Why she on this platform?! Aint she traumatized by Will??” one user asked.

This is the latest comment Schumer has made that has offended the Black community. After Will Smith’s Oscars slap against Chris Rock, Schumer faced criticism for saying she was “traumatized” by the incident.