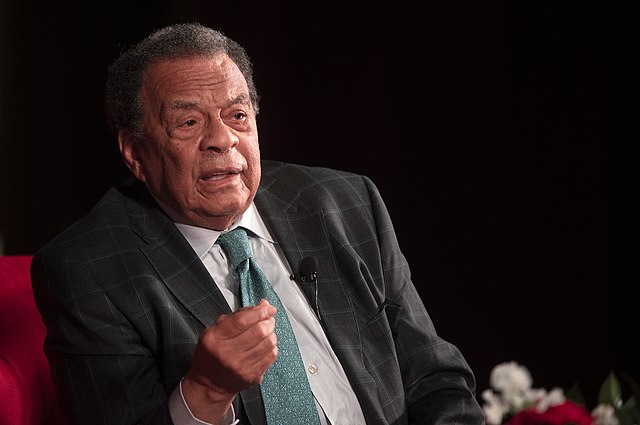 (Image: Wikimedia Commons / LBJ Library / Jay Godwin) Longtime civil rights leaders Dolores Huerta and Andrew Young discuss their social justice efforts at The Summit on Race in America at the LBJ Presidential Library on Monday, April 8, 2019. Huerta, a Presidential Medal of Freedom recipient, co-founded the United Farm Workers of America with Cesar Chavez in the 1960s and has spent decades advocating for laborers, women, and children. Young, a key lieutenant to Martin Luther King, Jr. in the civil rights movement of the 1960s, has served as mayor of Atlanta, U.S. congressman from Georgia, and U.S. Ambassador to the United Nations. Moderating the discussion is Mark K. Updegrove, LBJ Foundation president and CEO...The Summit on Race in America runs from April 8-April 10 at the LBJ Library...04/08/2019.

The Executive Leadership Council (ELC) announced today that it will honor the Honorable Ambassador Andrew Young, Jr. with the prestigious 2022 Global Game Changer Award during its 2022 ELC Recognition Gala on Thursday, Oct. 6, 2022.

The event is set to take place at the Marriott Marquis in Washington, D.C. at 6:00 p.m. ET and will be hosted by Entertainment Tonight’s Kevin Frazier with performances by Babyface and DJ Jazzy Jeff.

Founded as the preeminent global membership organization for Black current and former CEOs, senior executives, and board members of Fortune 1000 and equivalent companies, The ELC’s Global Game Changer Award honors an individual whose achievements transcend traditional roles for Black Americans, women and other underrepresented people and who represent a dynamic vision of how Black leaders globally can impact the world through political, economic, educational, and philanthropic empowerment and stewardship, according to a press release.

“For more than half a century Ambassador Andrew Young has dedicated his life to helping Black people around the globe,” said ELC President and CEO Michael C. Hyter.

“From teaching literacy and leadership skills in the rural South to serving as aide to Dr. Martin Luther King, Jr., and as the Mayor of Atlanta and ambassador to the United Nations, Ambassador Young exemplifies everything this award is meant to honor.”

Ambassador Young’s remarkable legacy is unapparelled, helping to change the course of history as a leader in the Civil Rights movement, he has been a civic activist, elected official, groundbreaking ambassador, social entrepreneur, and adviser to presidents. He was elected to office in 1972, becoming the first African-American representative from the Deep South to serve in Congress since Reconstruction. In 1977, he was appointed by President Jimmy Carter as the nation’s first African-American Ambassador to the United Nations. Among his many accolades over the years, Young has been the recipient of the Presidential Medal of Freedom and the French Legion d’Honneur and has received honorary degrees from more than 100 colleges and universities.