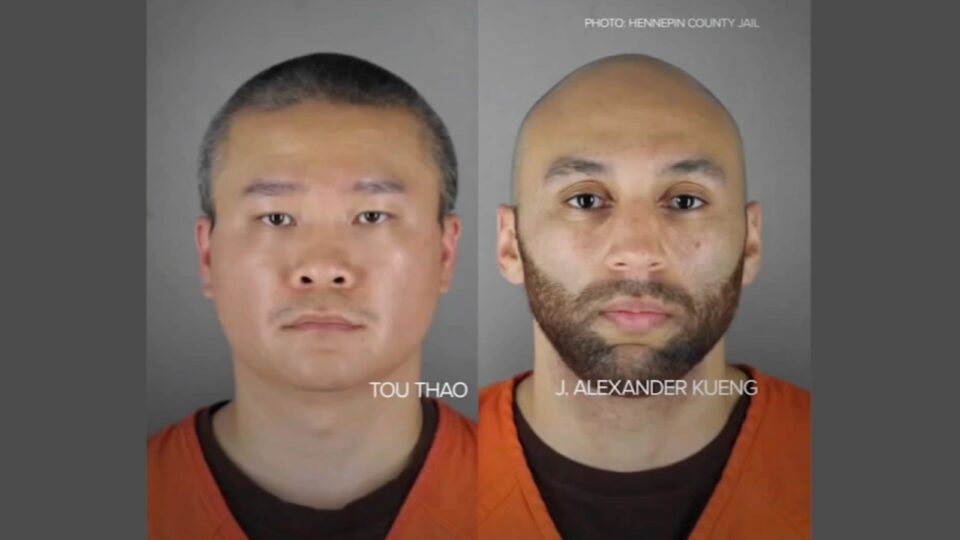 A former Minneapolis police officer who kept bystanders away from George Floyd and another officer who helped hold down Floyd as he fought to breathe were both sentenced to prison.

The sentencing means all four officers involved in Floyd’s death have been sentenced to prison.

The New York Times reports Judge Paul Magnuson sentenced Tou Thao to three and a half years in prison and J. Alexander Kueng to three years in prison after a jury convicted them of violating Floyd’s civil rights by failing to provide medical aid and failing to intervene when former officer Derek Chauvin pressed his knee on Floyd’s neck for more than nine minutes.

In his sentencing, Magnuson noted Thao was the more experienced officer who has been with the Minneapolis Police Department since 2008 while Kueng was a rookie officer. Thao, who is Asian and Kueng who is Black, still face state charges for aiding and abetting manslaughter and murder. The officers will be tried on those charges next January.

Floyd’s death set off a summer of national and worldwide Black Lives Matter protests and calls to defund police departments and reinvest tax dollars towards social programs to stem crime instead of increasing police budgets. However, in the years since, many municipalities have reversed their position and increased police budgets.

Prosecutors said at the sentencing Kueng never tried to aid Floyd once he lost consciousness and as a result deserved a “serious penalty” even though it wasn’t his intent for Floyd to die. At the sentencing, Thao addressed the court for about 30 minutes reading bible passages while Kueng did not address the court.

The sentences Magnuson imposed on Kueng, Thao and Thomas Lane, who helped pin Floyd to the ground, were all significantly shorter than what federal prosecutors suggested. The prosecutors asked the judge to imprison Lane for six and a half years, and Kueng and Thao for “significantly longer” than that, though less than 20 years.