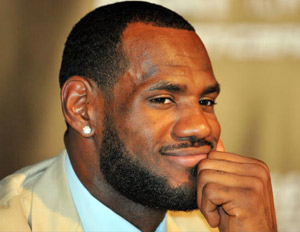 The NBA is leading the charge, enabling fans to be more connected with their favorite team and players.Â  The league has always been a personality-driven organization since basketball legends/rivals Earvin “Magicâ€ Johnson and Larry Bird entered the NBA in 1979.

When the NBA season tipped off, most basketball analysts predicted that the Miami Heat and Oklahoma City Thunder would be playing each other in the playoffs. Well, they were on point.Â  You have two popular young stars, LeBron James and Kevin Durant, that are matched up against each other.Â  Also, you have the love-hate relationship that many people–fans or occasional spectators– have with James, arguably the most disliked player in NBA history. The 27-year-old has an incredible story, one that spotlights a big-time local star who grew to become an international sports icon.

In May, 63% of live TV viewers multitasked with their smartphone, posting content online while watching television, according to an Internet Advertising Bureau report. Based on the data, it’s clear that the NBA’s popularity and overall increased online engagement would spark rampant viral discourse during the finals. The NBA has a very large online audience. Currently, the NBA Facebook fan page has over 13 million “likes” compared to the NFL (5.6 million), NHL (2.4 million), and NFL (1.3 million), combined. See how the NBA stacks up against other professional sports below.

* James has as many followers as the whole OKC Thunder team combined.

As a fan, it is important, and natural, to want to engage with other basketball enthusiasts about the game in real time.Will you be tweeting or Facebooking while watching Game 5 of the Heat-Thunder NBA Finals tonight? Let us know how you engage online via social media during the NBA finals.