The Magical Experience of Cuba 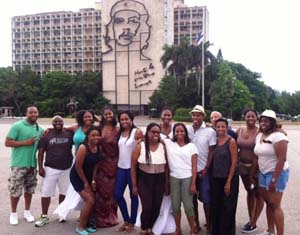 Our unforgettable journey included a private performance by Vocal Leo, a 14-member choral group that sang traditional Cuban music as well as negro spirituals. We had an engaging and uncensored discussion with a Cuban professor of economics about U.S./Cuban relations and what the restored diplomatic relations could mean for both countries. We even visited Ernest Hemingway’s Cuban retreat where he wrote two of his most famous novels. We toured a community garden called Organoponicos and learned that community gardens were literal lifesavers during Cuba’s Special Period in the 1990s, when Cuba experienced economic crisis and famine following the collapse of the Soviet Union. We visited a community art project and met with artists, explored the Used Booksellers Market, bought beautiful artwork at a local marketplace, had salsa dancing lessons, enjoyed an Afro-Cuban dance performance by the Havana Compas Dance company, and even experienced a Perfect Cuban Marriage–Cuban rum, black coffee, and a cigar.

Besides the refreshing culture and beauty of Cuba, being driven around Little Havana in 1950s-era Fords, Buicks, and Plymouths was a reminder of the impact of political and economic isolation, and it provided a reality check about how much control the Cuban government has. We relished taking photos in these automotive beauties but, for the Cuban people, it was all a result of a Cuban law that prohibited any cars from being imported from the U.S. after Castro took over. The Cuban spirit of entrepreneurship and ingenuity was evident in how the people have been able to keep these classic cars running and in pristine condition by using household items and self-manufactured parts, and then using the cars as taxis to make a living.