The NFL Says No Kneeling? Take a Stand [Opinion] 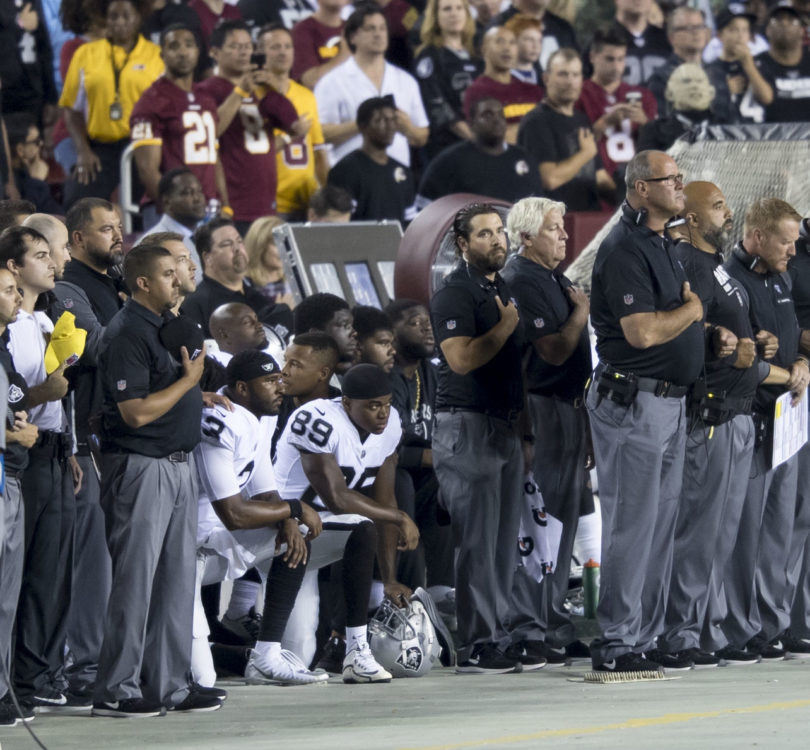 So, let me get this straight. We have now decided to be a country where the right to bear arms is protected and vigorously defended— even when our children and their teachers are being routinely mowed down by guns in our schools. But the right to kneel in silent, respectful protest at a sporting event is a punishable offense? This is who we are?

As NFL players whisper to sports reporters about new forms of protest being hatched in the wake of Wednesday’s league vote to fine teams whose players kneel during the national anthem, there has been no backstepping on the decision. Even though it’s been slammed by legions of fans, civil rights advocates, and much of the media, the new policy stands.

According to a broadly published statement by NFL Commissioner Roger Goodell, the move was designed to “keep our focus on the game and the extraordinary athletes who play it—and on our fans who enjoy it.”

Really? How’s that working out?

Note to the NFL: The Battle for Civil Rights Trumps Your Game

NFL owners, who apparently have deep concerns about where we all place our focus, reportedly agreed to this policy unanimously—even though some owners subsequently admitted they would just pay the fines, if necessary. What does that say about the NFL? And what does it say if we who consume the game don’t find a way to show them just how focused we can be—and where our focus must be if we have any chance at healing this incredibly divided nation?

Note to Goodell, all 32 franchise owners, and the powers they are clearly bowing to in the White House: No game, sports league, or song is more important than the very real social, political, racial, and economic issues that plague this country. If you truly respected the “extraordinary athletes” who care deeply enough about these issues to kneel during the anthem, you would respect their choice to do so.

The no-kneeling policy is an act of cowardice. The owners—all extremely wealthy and all white men, except two—could seize this opportunity to lead. Instead, they have refused to embrace their players (70% of whom are black, according to The Institute for Diversity and Ethics in Sport) and help the broad community of NFL fans confront the issues that prompted athletes—led by former 49ers quarterback Colin Kaepernick—to kneel in the first place.

The players have been offered the option of staying in the locker room as opposed to taking the field (even though Donald Trump told Fox and Friends on Thursday that those who don’t want to stand for the anthem “shouldn’t be in the country.”).

This new policy does more than seek to shove their protest underground; it chooses to prioritize and protect the game at the cost of shining a light on larger concerns about where our culture is headed, about what is unfair, unequal, and unjust in our society, and what can be done about it.

There Are Cancers in Our Culture; We Are the Cure

In the midst of a critical period defined by movements such as #BlackLivesMatter, #MeToo, #Enough, and #TimesUp, all aimed at driving hidden cancers in our culture into the light, how is #TakeaKnee any less deserving of our vigilant support? “Injustice anywhere is a threat to justice everywhere,” said Martin Luther King Jr. These movements are not unrelated. Think about it: Is the NFL’s response so different from school administrators who threatened to expel students for participating in the post-Parkland, Florida, massacre walk-outs?

Kneeling can mean a lot of things, but it is part of a universal language that the whole world understands. We kneel to pray, to plead, and to pay homage. We kneel in gratitude and in servitude. We kneel in anguish, in humility, and in hope. Regardless of what drives us to our knees, never has doing so been condemned as an act of disrespect. Until now. And like so much about our country in recent years, this response—exemplified by this policy—seems unreasonable at best and, at worst, unconscionable.

Admittedly, I am not a football fan. I watch the Super Bowl mainly for the commercials and half-time show. I understand that for fans, there is much more at stake here. But I lead a brand that encourages women to own their power, and fans have power too.

Another great King quote says, “Power at its best is love implementing the demands of justice.” A few players have been brave enough to make like King and take a knee in the interest of justice. When will those who love the game do the same and take a stand?