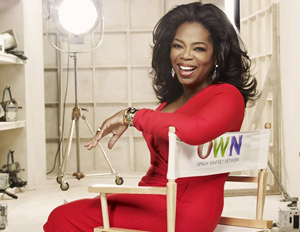 There’s no denying the power of Oprah Winfrey. The Queen of Talk, worth a reported $3 billion, is a household name in the U.S. and abroad. Her influence is so strong that people even coined a phenomenon after her: The Oprah Effect. The Oprah Effect suggests that just one co-sign from theÂ iconÂ willÂ result inÂ overnight success, literally. In 2009, a Florida cake business, We Take the Cake, was on the verge of bankruptcy. As soon as Winfrey got a taste of the company’s Key Lime Bundt Cake and featured it on her “Favorite Things” episode, the cakery sold 10,000 cakes after the show aired and became a million dollar business. Oprah has used her powers for good in the case of celebrity careers as well. Before wrapping up the 25th and final season of The Oprah Winfrey Show, she would often bring on expert guests. If their expertise triggered a big enough aha moment, the media mogul would make them regulars among her 44-million-viewer audience; she even gave some of them their own segments. Of the experts who were fortunate enough to get the Oprah nod, many have successfully catapulted to new heights. Here are five superstar careersÂ whoÂ got hit by The Oprah Effect.