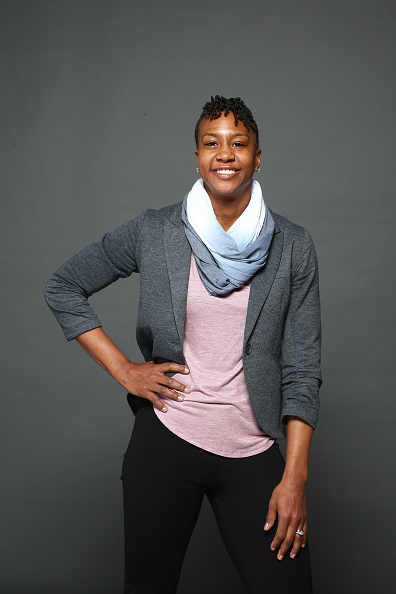 As the WNBA prepares to celebrate its historicÂ 20thÂ season starting May 14, one of its greatest players will also commence her last season. Before her final lap, three-time Olympic gold medalist Tamika Catchings has released Catch A Star: Shining Through Adversity to Become a Champion, an autobiography chronicling her journey.

Below, Catchings shares insights on her new book, overcoming being born with a profound hearing loss, and how the WNBA continues to inspire the next generation of female athletes.

Blackenterprise.com: After playing in the WNBA for 16 years, what made you want to release a book now?

Tamika Catchings: Over the years, I’ve done a lot more speaking, and everywhere I go people always say, ‘I wish you had a book or CD, DVD or something that I could take to my family or friends.’ So for the last couple of years I’ve been like, ‘Hold on it’s coming!’

How did you overcome a hearing loss to excel at sports?Â

When I was younger, it affected me more because I got bullied and made fun of and didn’t understand why I was different.Â Over the years, I ended up throwing my hearing aids out. I began when I was in second grade and literally didn’t start wearing a hearing aid again and going back to speech class until my freshman year in college. I wanted to fit in, and I felt like my hearing aid, because it was big and bulky, made me a target and visibly different from everybody else. Having to go through that is really where sports became important to me because I knew that if I could play sports and get really good, people couldn’t make fun of me.

We also know that you had a few painful physical injuries. How did you surmount those challenges?

I tore my ACL my senior year in college. My goal was to play in the WNBA so I thought “Oh my gosh, no one is going to draft me.â€ I’m a very faith-oriented person so I’m like, ‘OK God, what’s the plan? What’s going on?’ Even though I was able to come back from that and get drafted, I still struggled because I got up to Indiana and didn’t know Indianapolis because I had never been here.

Then, I tore my Achilles in 2007, which was the year before the Olympics. I remember thinking, ‘Oh my gosh, I really want to play.’ So I did the same thing during that rehab process as I did during the first. I was grinding and thinking every single day, I had to be better than the day before. That was my mindset.

What does the WNBA’s 20th anniversary mean for you and women overall?

For me, thinking back to the beginning of the W, looking at the success of the ’96 Olympic team and how that translated into the WNBA, it’s been cool to be a part of the journey. I remember even when I came in–this will be my 16th year–there were so many people that said, ‘The WNBA is never going to make it.’ So from that standpoint, it’s like wow, you can see we’re still here. Not just we barely made it and we’re struggling; no, we’re here and we are strong and have great players that are coming up.

The 50 Billion Dollar Boss Is Worth Every Penny

FacebookTwitterYoutube
← On World Water Day, Here are Three U.S. Cities Fighting for Freshwater ← The 50 Billion Dollar Boss Is Worth Every Penny
×
'