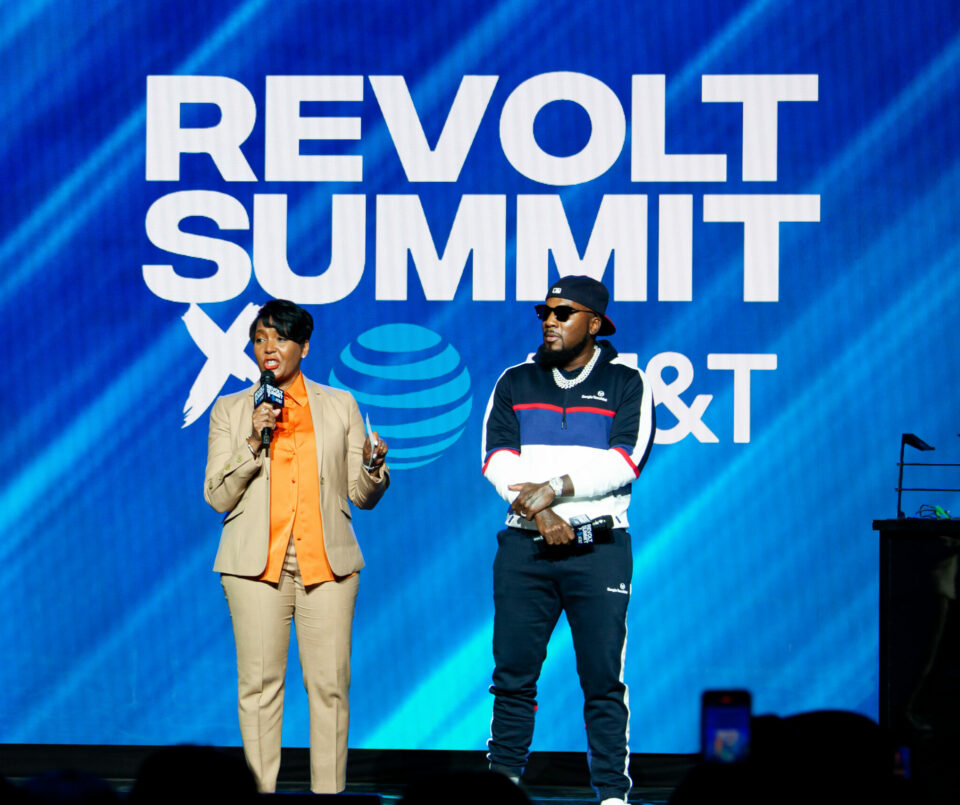 The REVOLT Summit x AT&T marked its in-person return earlier this month in Atlanta, Georgia with a bevy of panels, workshops, and one-on-one mentorship sessions aimed at empowering the next generation of Black artists and leaders. A number of entertainers, activists, athletes, and financial experts spoke at the three-day music conference, including Offset, Allen Iverson, Chance the Rapper, Angela Yee, and 2 Chainz. In addition, attendees were treated to performances from top hip hop acts like the City Girls and Meek Mill.

The summit kicked off on November 11 with a “Welcome to Atlanta” ceremony that included appearances by rapper and entrepreneur Jeezy and Atlanta Mayor Keisha Lance Bottoms, who cautioned attendees to practice COVID-19 safety protocols.

“I hope you all have a great summit,” said the elected official affectionately known as Mayor Keisha. “And remember, we’re still in the middle of a pandemic. So, if you’re not vaccinated, please keep your mask [on].”

The summit continued with the Dream in Black Pitch Competition, where entrepreneurs of color in the tech industry presented business ideas in a high-energy competition. Media personality and entrepreneur Angela Yee and digital architect Iddris Sandu served as judges during the competition and awarded Donald Boone with first place for his innovative BoxedUp Equipment Rental business.

“You got to always remind yourself where you’re from,” Sandu told BLACK ENTERPRISE after the competition. “I’m a kid from Compton, originally. And I always rep Compton no matter where I go and it’s important for people to see that and not forget where we come from because where we come from is essentially the building blocks to our future.”

The night ended with a comedy show led by Wild N’ Out stars DC Young Fly, Karlous Miller, and Chico Bean, which was followed by performances from Lil Yachty and City Girls.

On day two of the summit, the city of Atlanta declared November 11 as “REVOLT Day” and awarded REVOLT CEO Detavio Samuels with an official proclamation. Samuels, who was promoted from COO to CEO of REVOLT earlier this year, stressed the importance of supporting Black-owned media as a source to inform and empower the Black community.

“As a media company, we have firmly created a business model that is rooted and invested in Black-owned businesses. As REVOLT drives revenue and [moves towards becoming] a billion-dollar company…we are measuring ourselves by how much we are pouring back into our community,” Samuels told BE.

Other highlights from day two included a live taping of the new REVOLT series “Assets Over Liabilities” hosted by Rashad Bilal and Troy Millings, the founders of the wildly popular podcast Earn Your Leisure. During the session, Chance the Rapper touched on the benefits of being an independent music artist, declaring that it allowed him to generate more revenue than if he would have signed a deal with a record label.

“You don’t really need a boss,” said the 28-year-old hip hop star. “When you work for a label, they decide…a lot of stuff.”

“Crypto is a tool of liberation,” said Dunlap. “I know everyone thinks is decentralized — it is for the time being, but in a few more years, it won’t be,” he said urging attendees to invest in and educate themselves about digital currency. “When I got into it in 2013, it was very cheap in comparison to where it is now. So, the longer you wait — and I make no money for you to join anything crypto-related — I’m just telling you, you’re going to miss out on hundreds of hundreds of millions of dollars. And when they wipe this f–king job market clean in 2024 [or] 2025 when we have our next crash, they’re not going to care about the recovery and they’re not going to be able to print as much money as they did before.”

During “The Power of the Black Dollar” session, The Breakfast Club’s DJ Envy was joined by a panel of entrepreneurs like beauty entrepreneur Melissa Butler, the founder of The Lip Bar, influencer Jayda Chaves, and artist Lecrae who talked about the importance of supporting Black businesses as a means to strengthen the Black community.

In a fireside chat, sports journalist Taylor Rooks spoke with legendary NBA star Allen Iverson about maintaining good mental health while dealing with the pressure to be your truest self no matter the cost.

Media personality Van Lathan also moderated a discussion titled “I’MA Do Me” that Included top creative and artists like Lil Yachty, Amine, Alonzo Arnold, and Big Bank Keisha about unapologetically living their truth and tapping into their inner-selves to advocate for their craft.

Day two of the Summit ended with live performances from Yung Bleu, Rubi Rose, and Nyla Symone, who received standing ovations from the crowd.

The REVOLT Summit wrapped on November 13 with a panel discussion featuring headliners Offset and Killer Mike along with rapper 2 Chainz who moderated a discussion on how young leaders can use their voices to effect real change in Atlanta and beyond.

Additional panels throughout the day included a heated discussion between Civil Rights Attorney Ben Crump, artist and activist David Banner, Justin Moore, and three Black police officers in a multilayered discussion on Black safety, which was moderated by REVOLT Black News host Eboni K. Williams. Furthermore, the cast of “The Game” reboot talked about their new series on the main stage.

The final day of the summit also included a couple of surprises. Young Thug surprised long-time friend Gunna on stage during his insightful panel on growth and career milestones. Meanwhile, the conference concluded with15 a surprise performance by Meek Mill.