The Rise of Female Coaches in Men's Sports 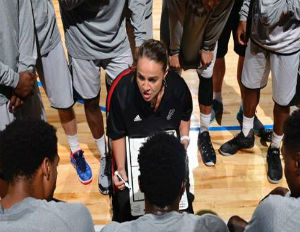 Earlier this summer, Becky Hammon made headlines when she was announced as the first female head coach in summer league history, for the NBA’s San Antonio Spurs summer league team. Picking up the torch from Natalie Nakase , who served as an assistant coach with the Los Angeles Clippers summer league team in 2014, Hammon executed brilliantly and ultimately brought home the Summer League championship, winning six games in a row to secure the title.

[Related: Actor Jesse Williams Sums Up His Thoughts on Sandra Bland and Racism in America in 24 Epic Tweets]

For the 38-year-old Hammon, this is just the latest in a series of accomplishments on her already polished resume. The six-time WNBA All-Star received rave reviews from notoriously tight-lipped Spurs head coach Gregg Popovich last season when she was introduced as one of San Antonio’s assistant coaches–marking another league first.

“She’s a firecracker. She takes no prisoners. She’s got a great personality,” Popovich said last season to ESPN. “She knows her stuff. She’s competitive.”

The trust and confidence from Popovich, as a future Hall of Fame NBA coach, have been wonderful additions to Hammon’s locker room repertoire. As she told Sports Illustrated earlier this month, “You never know what your journey has in store… You just work hard and keep your nose to the grind. You do things the right way, you treat people the right way, and good things happen. … I’m just thankful that [Popovich] trusted me with the guys in that locker room and that those guys trusted me back.”

As Hammon continues to reshape the NBA’s coaching landscape, Jen Welter is making a similar journey in the NFL–as the first-ever woman to be a part of an NFL coaching staff. Yesterday, the NFL’s Arizona Cardinals announced that Welter would join the team as an intern coach for training camp and the preseason.

During her introductory news conference, Welter said of the opportunity, “I didn’t start playing football to be here… I didn’t even dream that it was possible. I think the beauty of this is that, though it’s a dream I never could have had, now it’s a dream other girls can grow up and have.”

While her future success isn’t guaranteed, Welter’s impressive background makes her more than qualified for the task ahead of her. Similar to Hammon, Welter’s accomplishments on and off the field to this point definitely make her a standout candidate; per Jezebel, ‘Welter, who was a rugby player at Boston College, played 14 seasons of women’s pro football, eventually becoming the first female running back, a non-kicking position, for the Texas Revolution of the Indoor Football League team, a men’s pro league. In 2010 and 2013, Welter won two gold medals with Team USA during the International Federation of American Football Women’s World Championships. And between all of that, she earned a master’s degree in sports psychology and a Ph.D. in psychology.’

Speaking of his decision to extend the opportunity to Welter, Cardinals head coach Bruce Arians said frankly, “Coaching is nothing more than teaching. The one thing I’ve learned from players–all they want to know is: ‘How [are] you going to make me better? If you can make me better, I don’t [care] if you’re the Green Hornet. I’ll listen.'”

The NFL and the Cardinals organization both took to Twitter to express their support, and the move even received some unexpected attention from Vice President Joe Biden –