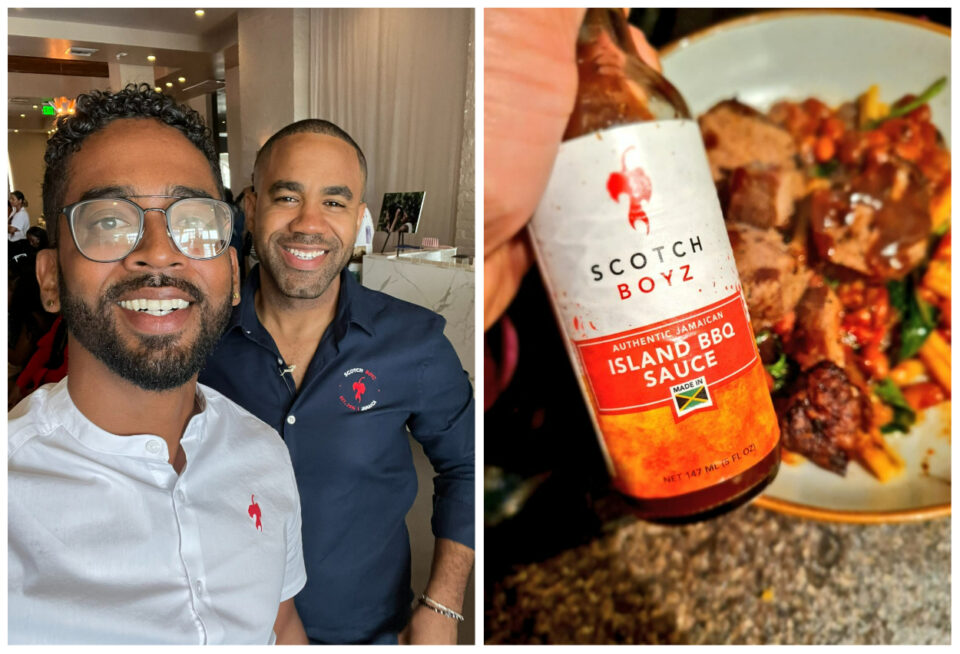 Four friends living in Jamaica entered a barbecue grill-off competition in 2015, using one of their grandfather’s jerk recipes.

“We came first in two categories so four months after, people kept saying ‘you cook so well’ and ‘your sauces are amazing’ so they kept asking us for the sauce from the grill off so when somebody actually paid us for it we knew had to bottle it,” Scotch Boyz Co-founder Neil Hudson told BLACK ENTERPRISE.

The Scotch Boyz, which is the same name they used in the cooking competition, includes Drew Gray, Matthew Wallace, Kemar Swaby and Hudson. In addition to their flagship Scotch Bonnet Pepper sauce, the Scotch Boyz have another five sauces they feature.

Hudson told BLACK ENTERPRISE the story of how Jamaican Jerk originated on the island and how it’s a special part of the country’s culture.

“Well the jerk is integrated with Jamaican history and culture,” Hudson said. “The method of cooking jerk now is on open fires, but it used to be cooked over pimento wood that was buried underground because it was cooked by runaway slaves living in the hills of Jamaica. So jerk is synonymous with Jamaica and we’re taking a modern spin by bringing in the flavors of Jamaica  to the world.”

All of the Scotch Boyz sauces are made with natural ingredients including peppers, onions, scallions and thyme. Additionally, the group has stayed true to its roots. The sauce is processed and bottled in Jamaica and they get their ingredients from local farmers in the country.

“So our ingredients come from more than two hundred small farms in Jamaica so that way we have a direct impact on the community so Scotch Boyz success has a local impact on the community, we’re their peppers can find a market on the world stage through our sauce while we Founders are Jamaican American we’re holding true to our Roots by bringing the best of Jamaica to the world.”

Earlier this year the Scotch Boyz were one of the three winners of SheaMoisture’s Next Black Millionaire Fund. Each business will receive a $100,000 grant, business development services, retail distribution support, and an opportunity to collaborate with SheaMoisture and participate in a streaming docuseries that follows their journey over the course of the year.

Hudson told BLACK ENTERPRISE he heard about SheaMoisture‘s Black Millionaire through another venture by the company.

“When we found out, we were ecstatic, my partner called me and couldn’t believe it we were screaming ‘We really won,” Hudson said. “So the money and the access to scale the brand to a million dollars is worth its weight in gold so we’re extremely happy about the program and we’re extremely happy that it can help have an impact on the farmers we buy peppers from, it’s great exposure for the brand and we’re meeting other successful black entrepreneurs around the way so it’s truly inspiring.”

Hudson added the money will help scale the business up and SheaMoisture is helping the group form a relationship with major retailers including Target to put the sauces in stores nationwide.