The U.S. Virgin Islands Bring a Taste of the Caribbean to Philly 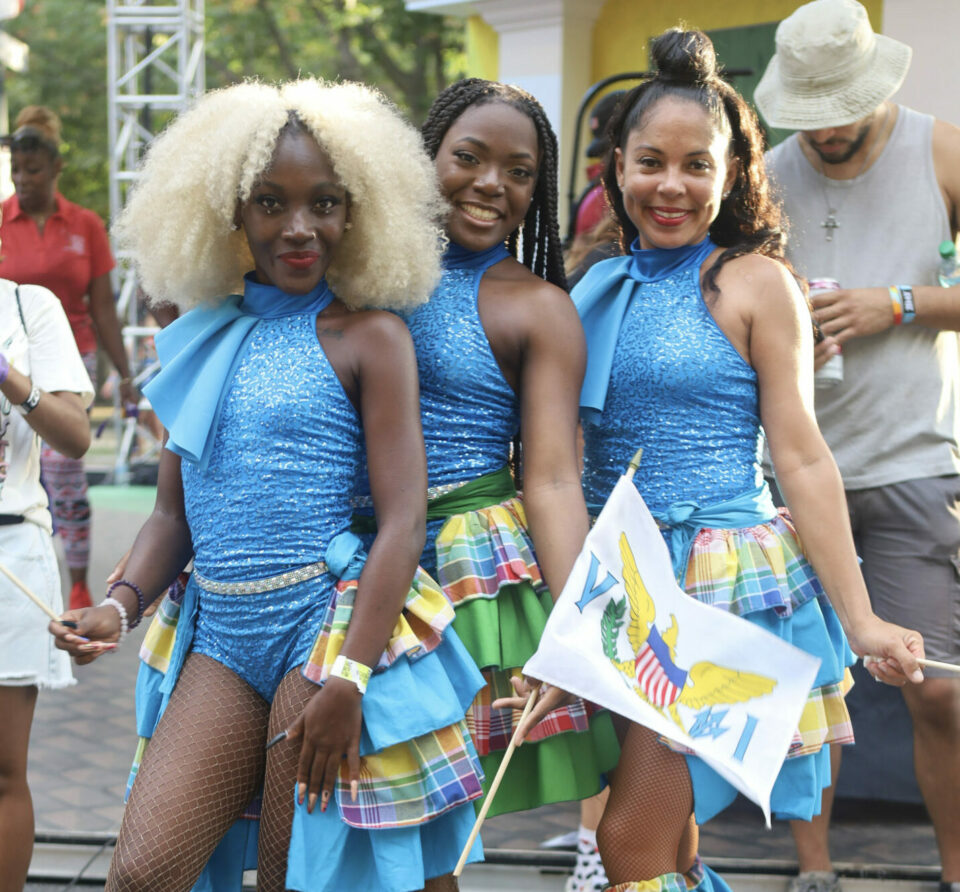 Dancers at the USVI activation at the 2022 Made In America Festival in Philadelphia, PA (Photo Credit: Julian Lee)

In addition to chart-topping acts like Tyler the Creator, Burna Boy, Bad Bunny, and Jazmine Sullivan, attendees at the Made in America Festival in Philadelphia last month were treated to a taste of the U.S. Virgin Islands (USVI).

The USVI tourism department partnered with Jay-Z’s Roc Nation, which powers the annual music festival, to bring Caribbean culture to the Benjamin Franklin Parkway (where the festival took place) during Labor Day weekend. The USVI showcased the islands’ lively spirit through Mocko Jumbies stilt dancers and soca music while allowing attendees to swing over a photo of turquoise waters. The convivial activation served to give festival-goers a small preview of what to expect during the upcoming St. Croix Crucian Festival, taking place from December 30 to January 7. Plus, the USVI announced that one lucky festival-goer would win a free trip to the islands.

“Our environment is a lot different from Philly. We have beaches at every corner,” Ian Turnbull, the Division of Festivals Director at the U.S. Virgin Islands Department of Tourism, told BLACK ENTERPRISE at the festival. “You’re at Made in America, but you can have a Caribbean paradise experience at this festival.”

This marked the second consecutive year that the USVI hosted an activation at one of the country’s biggest Labor Day weekend events. The effort was part of the USVI Department of Tourism’s mission to drive visitation to the islands of St. Croix, St. John, and St. Thomas. Turnbull says the islands saw an uptick in travelers from Philadelphia following Made In America last year, making the decision to return to the City of Brotherly Love easy. “We saw the numbers, and that’s why we’re here again.”

Joseph Boschulte, the Commissioner of Tourism at the U.S. Virgin Islands Department of Tourism, called the USVI activation at Made In America a “resounding success.”

“Anecdotally, seeing the reception of the people was amazing,” he told BE. “Not only were they dancing with the Mockos and the entertainers, but they actually [took] snapshots of our QR code,” he said, adding that he felt “a sense of pride” seeing USVI swag gear throughout the festival.

As part of the #MadeinParadise partnership with Roc Nation, the U.S. Virgin Islands hosted a contest to give one lucky local artist the opportunity to perform at Made in America. 5’2, a rapper, was selected by Roc Nation from a pool of other contestants that included Mic Love, Scarzeo, and Th3rd.

“I always wanted to come [to Philadelphia] as a kid, but I’m from the islands, so it’s not necessarily accessible,” 5’2 told BE after her performance. “It’s so small. It’s 32-square miles, specifically St. Thomas where I’m from. And I think that opportunity is so scarce down there. So, when I got this opportunity, I was super excited to come and show out and show them the talent that the Virgin Islands holds.”

Turnball said the USVI was incredibly proud to have the petite rapper represent their country and culture at Made in America. “She’s polished. She has some great music. She’s in right in line with the Megan Thee Stallions and the Cardi B’s of the world,” he told BE. “The whole Virgin Islands is excited about this moment because it’s not every day you get to go on a big stage [as an] up-and-coming artist.”

Book a Trip to Paradise

According to Boschulte, now is the best time to book a vacation to the USVI. For one, he says, Americans don’t have to worry about the burden of traveling internationally or the possibility of getting stuck overseas due to COVID.

“We’re a U.S. territory, so you don’t need a passport,” he said. “We expect different iterations [of COVID] to come around. So being a U.S. territory, you know one thing for sure, if you come to the Virgin Islands, you know you can get home. It’s not going to be a situation where it’s locked down and you can’t make it back.”

Plus, traveling to the islands is convenient, since many services provided in the United States are offered there as well.

He went on to stress the beauty and warmth of the islands to entice tourists. “The beaches are beautiful. Our people are genuine,” he said. “They are genuinely happy to have you experience what we have to offer in the territory.”

He continued, “The USVI is a safe destination with many options on land and on the water. We welcome you down.”