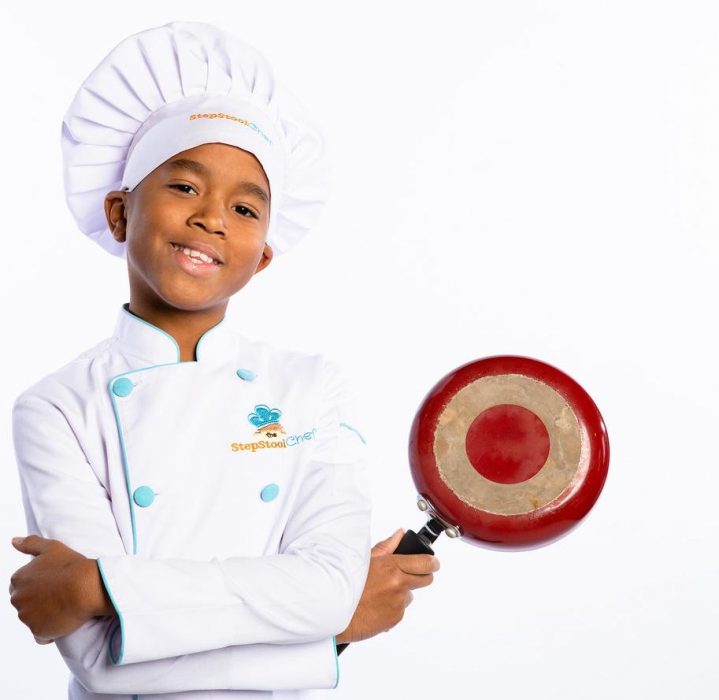 Through a partnership with SideChef, a digital home cooking platform, Frederick shares his kitchen secrets with more kids.

“I want to help kids build their cooking skills and confidence while creating great family time memories,” Julian Frederick shared with BlackBusiness.com. “The Step Stool Chef teaches kids to be leaders in the kitchen, providing tools and solutions for them to learn to cook in a safe space with little to no help from parents. At the Step Stool Chef, the kids are the chefs, parents are the assistants.”

From Passion to Profits

Frederick has always had a passion for cooking since the age of three. When his mom, Toria Frederick, gave him the green light to express his creativity in the kitchen on his third birthday, his talent and drive were unparalleled. She knew that it was time to nurture his talent.

“I got snowed in on my third birthday,” Frederick told the Dallas Observer. “Unfortunately, I had to cancel my birthday party plans. I told my mom I wanted to make my own birthday cake, and she let me. That was the first time I ever got to cook by myself. And I instantly knew I wanted to cook.”

That was the beginning of a profitable opportunity. At 8-years-old, Frederick started selling kid-friendly cooking products around the U.S. He also signed licensing deals in China.

With a variety of experiences under his belt, the Texas-based kid entrepreneur started The Step Stool Chef with his mom in 2016. He knew it was time to share his culinary gifts with other kids. Later, he created an online course to expand his impact.

A Cooking Academy for Kids

As the CEO of The Step Stool Chef, Frederick has been able to develop kid-friendly cooking lessons, products, and recipes. He’s also the go-to person when it comes to recommendations for products and training that are perfect for kids. Now, at the age of 12, Frederick has inspired thousands of kids through his cooking lessons. He’s also the author of the book, The Step Stool Chef Cookbook For Kids.

The launch of The Step Stool Chef Cooking School For Kids by SideChef Premium will take the mother and son duo’s vision to the next level. Frederick’s mom told BlackBusiness.com, “This unique partnership allows us to merge kid cooking, education, and technology.”

She adds, “As distant learning and homeschooling become a reality for many kids across America, these on-demand cooking classes are a great complement to the new reality of present-day at-home education. This is a great solution for families wanting to spend more time together that also supports kids learning to be more independent.”

Inspiring the Next Generation of Leaders

Frederick proves that age shouldn’t be a barrier to living your dreams. His personal mantra, “I can do it”, has been a motivational phrase that has helped him to continuously climb higher. When Frederick’s mom heard these words come out of her son’s mouth, it was confirmed that it was time to let him grow into the person he was created to be.

Now, Frederick is showing other kids that they ‘can do it’, too. Although Frederick already has a remarkable list of accomplishments on his resume, there is no doubt that the future is even brighter. The long-term prospects for Frederick’s movement could be even greater: building the next generation of kid millionaires and community leaders.