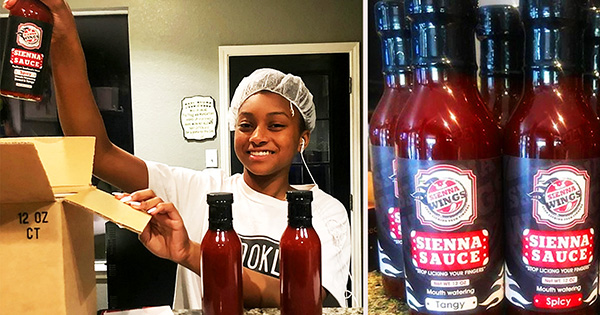 Tyla-Simone Crayton is a 16-year-old home-schooled teen entrepreneur from Houston. She is the CEO of Sienna Sauce, which started in April 2017. Crayton created the recipe for her special secret sauce when she was just 8 years old. Now, she is selling the award-winning sauce in over 60 retail stores, online, and through 90 distributors across the U.S. and earns an estimated $8,000 a month, according to BlackNews.com.

Crayton grew up in Bedford-Stuyvesant, Brooklyn, and then relocated to the Sienna Plantation area of Texas, hence the brand name Sienna Sauce. In an attempt to recreate the flavor of sauce she missed from back home, she replicated a similar sauce. This home-based company offers three flavors, which are Sweet & Tangy, Spicy, and Lemon Pepper.

Since launching, Sienna Sauce has already been recognized for its rich taste and quality. The brand participated, and won “Best Sauce,” in the 2018 and 2019 Sauce-A-Holic Fest, competing against 15 other brands.

Crayton joins a long list of Generation Z (those 25 and younger) entrepreneurs, investors, and inventors in the U.S. According to Business.org, unlike previous age groups, Generation Z has grown up with the internet, and they inherently know how to market themselves through social media. They also grew up through the recession of the 2000s, which has made them wary of the “security” of working for a major corporation. A majority of Generation Z are not asking for handouts, considering that 77% of people aged 14 to 21 are already earning their own money.

As Crayton’s business rapidly expands, she already has many accolades under her belt. She has won two pitch competitions: $25,000 in the Side Hustle Showdown on GMA: Strahan, Sara & Keke and $10,000 in the REVOLT Pitch Competition for young entrepreneurs. And she also received a Pinnacle Award from the Greater Houston Black Chamber of Commerce as the first-ever recipient to receive an award for Youth Entrepreneurship.